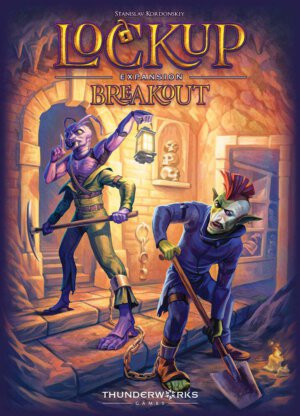 Thunderworks Games will be releasing a new expansion to their Lockup board game. In Lockup: Breakout, players will explore the catacombs beneath the prison as they look for a famed warriors tomb and an escape route. The expansion is for one to five players, ages 14+, plays in around 45 to 90 minutes, and will carry an MSRP of $29.95 when it arrives in March. You’ll need the core game to utilize the expansion.

Everyone in Kulbak has heard rumor of secret passages that run beneath the prison. Ages ago, the catacombs carved into these mountains were used to house fallen heroes. Queen Gimnax built a prison over this sacred site during the Great War, enclosing those ghosts and their treasure behind its walls.

Some say the catacombs lead to the tomb of Khathandor, greatest of the Dragul warriors. Others swear that the real treasure to be found in the tunnels beneath Kulbak is a crack in the prison’s outer wall. To find the truth, you’ll have to send your seeker to explore the crumbling catacombs by lantern light.

New opportunities await you above ground, too, as you influence the legendary characters who inhabit the prison. Strike a deal with Warden Mercy. Make a truce with Masik and his Starlit Door cultists. Commune with the spirit of Khathandor. Gain their favor while you probe the hidden history of Kulbak in search of gold and freedom.

Unboxing and First Look at Undaunted: North Africa on The Gaming Gang Dispatch #730

Cape May Arrives This June from Thunderworks Games