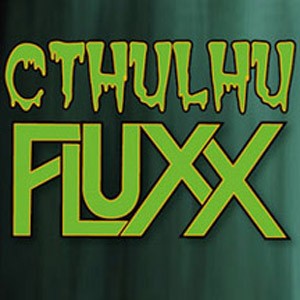 Someone better get ready to catch Elliott because he may swoon as Looney Labs has announced Cthulhu Fluxx, which will arrive this August. The official word so far is fairly slim although the inside dope is the game will play a bit more like a classic H.P. Lovecraft story as opposed to the usual lunacy of a game of Fluxx. Supposedly Looney founder, Andy Looney, isn’t the biggest Lovecraft fan around so efforts were made to bring Oz Fluxx (releasing March 23rd) to market before turning an eye to Cthulhu Fluxx. Luckily, Kristen Looney is a fan of the idea of a Cthulhu game so the project was greenlit and Cthulhu Gloom designer, Keith Baker, is involved. According to Keith, “What’s important to me is to create a game that is worthy of the Mythos connection – something where the gameplay feels like a Lovecraftian story, and not simply classic Fluxx with Cthulhu as a Creeper. I also want it to have depth that Mythos fans will appreciate, while still being accessible – and ideally, educational – to people who aren’t familiar with Lovecraft’s work.”

To those obsessed with Cthulhu: we’re planning to bring out Cthulhu Fluxx in August. If you just can’t wait that long, you’ll have the chance to playtest Cthulhu (and other prototypes) with Andy & Kristin at the following upcoming conventions: LunaCon, PAX East, Boston Anime, and Midsouthcon. (Those who know designer Keith Baker can also stalk him, since he is in possession of the other Cthulhu Fluxx prototype.)