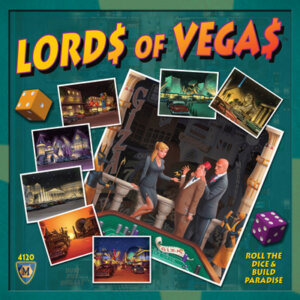 Mayfair Games’ newest release, Lords of Vegas, is on its way to retailers and distributors. The game, designed by James Ernest and Mike Selinker, is expected to hit shelves on Thursday, September 23, 2010. Age of Industry, a Treefrog Games title by designer Martin Wallace, distributed in North America by Mayfair Games, has begun shipping to retailers and distributors and should arrive in stores in the next week. Both titles were previewed at Gen Con Indy 2010 and have received very positive accolades and comments from both reviewers and players.

In Lords of Vegas, players are the ultimate Vegas speculators. Starting with nothing but a couple of parking lots, each player will build themed casinos – sprawling and reorganizing to grow and swallow neighboring casinos. Raise money by gambling or trading. Almost everything can be
traded: money, land, casinos, even the casino decor! Nothing is a safe bet though, for adjacent casinos might merge and any boss with the right cash
can risk a wild reorganization. Everyone is rolling for the top, for only the strongest casino boss makes the calls and reaps the glory. Two to four adults, ages 12+, can play. So become a Lord of Vegas, roll the dice, and grab your piece of paradise!

In Age of Industry, players are tycoons in the early days of the Industrial Revolution. They will invest in the production of raw materials as well as the manufacturing and transportation of finished goods. How well you can predict and succeed in the market will determine the victor. Age of Industry is for two to five adults, ages 12+, and comes with a two-sided board so that players can try to control the industry of Germany or southern New England. 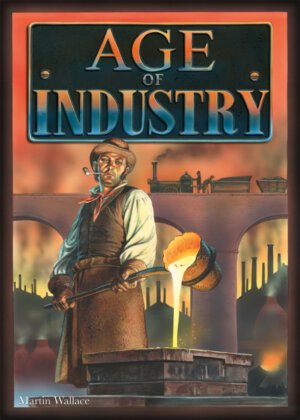