Lost Empires: War for the New Sun Arrives in Q1 2023 from Kolossal Games

An interesting looking science fiction game will be arriving early next year from Kolossal Games. Take to the planet 581 in Lost Empires: War for the New Sun as two players battle for control of a new homeworld. The game is for is for two players, ages 14+, plays in around 30 minutes, and will carry an MSRP of $35.00 when it arrives in Q1 2023. There’s also an expansion arriving at the same time Crown of Ashes (MSRP $69.00) which will bump the player count to four and include solo rules.

On this distant planet, four factions battle for control of alien artifacts left behind by an advanced and ancient civilization. The warring factions are Terra Corps, Scion Imperium, Neo Human Republic, and Feng. With Earth in near ruins, 581 provides the chance for a second Earth, but who will rule? Who will be the first to build a Wormgate and transport their armies through it to conquer the dust of 581?

During the invasions of 581, the factions built large, interstellar bases to house, control, and deploy troops. These bases are known as Hives. As a player, you take on the role of a commander of one of these Hives, from which you deploy your forces in the fight for control of the ancient alien artifacts and dominance over 581 itself.

Lost Empires is a head-to-head, card-driven area control game with a focus on tactical movement and deck design. Each player chooses a faction to play, and using the cards available to that faction, constructs an 18-card deck with which you do battle. You earn artifacts by controlling objectives and destroying elite enemy units augmented with alien technology. Once you have collected sufficient artifacts, you use them to construct a Wormgate. The first person to build a Wormgate, wins the war for the new sun.

Jeff McAleer
Founder/Editor-in-chief of The Gaming Gang website and host of The Gaming Gang Dispatch and other TGG media, Jeff tackles any and all sorts of games but has a special fondness for strategy, conflict sims, and roleplaying games. Plus, he's certainly never at a loss for an opinion...
Latest posts by Jeff McAleer (see all)
Tags: Kolossal Games, Lost Empires War for the New Sun 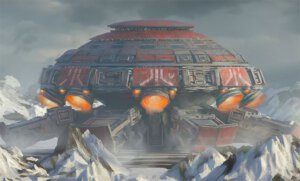 Lost Empires: War for the New Sun Arrives in Q1 2023 from Kolossal Games

An interesting looking science fiction game will be arriving early next year from Kolossal Games, Lost Empires: War for the New Sun.
0
Awful