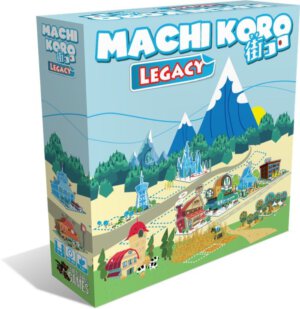 Pandasaurus Games has revealed an all new entry into the Machi Koro series will be hitting stores next year and, interestingly enough, it’s a legacy title. Machi Koro Legacy will play out over a series of ten sessions at which, when the final game is finished, players will have their own custom game to continue to enjoy. The game is still a ways off so no info yet on number of players, age recommendation, or MSRP.

Machi Koro Legacy is an all new game with an amazing narrative arc set in the world of Machi Koro.  We can’t say much, but we can tell you this:  Everything will change, and change again across this 10 game narrative arc!

When we first came to Rob Daviau (Pandemic Legacy, Risk Legacy, everything)  with the idea of making Machi Koro Legacy he said no.  So we asked again, and he said no.  Not because he didn’t want to make the game, but because he didn’t have the hook on how to make the game right.  Then one day, I got an e-mail out of the blue.  Rob had an idea.  And what an idea it is.

The story is a tale of [redacted] based on the Japanese [redacted] that was created with input from Nobuake Takerube, and the game will feature all new artwork from Nobura Hotta, the original artist of Machi Koro!