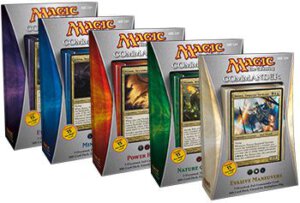 Folks who love the free for all aspect of the Commander style of playing Magic: The Gathering should be pleased to know the five new decks tailored to whooping it up in multi-player are now on store shelves starting today. The Commander Decks each contain 100 cards and carry an MSRP of $29.99.

Peace stretches across the languid land . . .

but not for long. The mists of time recede from the open field, only to reveal figures forged on the anvil of destiny. They are mighty. They are storied. They are legendary. And they are about to battle for supremacy. Commander is a casual multiplayer format in which each player’s deck is led by the legendary creature of his or her choice—fittingly, that’s the deck’s commander. The rest of the deck is a specially crafted arsenal of creatures, artifacts, and other spells, designed to reflect the personality of that commander and take advantage of his or her strengths. Your commander itself starts the game face up outside your deck, in a special area called the command zone. Not only does your commander get to witness all the action from this lofty perch (and, of course, intimidate your opponents right from the get-go), you can cast your commander from there! That makes it an ever-present threat to show up on the battlefield and personally take charge. If your commander would die, you can whisk it right back to the command zone instead, where it’s ready to be cast again.

Magic: The Gathering Commander 2013 will consist of five different 100-card singleton decks, each with a suggested retail price of $29.99. To continue the tradition of oversized cards associated with our multiplayer releases, each deck will also include three premium oversized legendary commander cards that can be used in lieu of the normal versions of the cards (which are also in the deck).

A Commander game is best enjoyed as a Free-for-All game among 3–6 players, although two-player games are also common. The game is a freewheeling back-and-forth battle in which alliances are formed, friends are betrayed, and grudges are repaid with a vengeance. Entire battlefields of creatures are wiped out with regularity, and anyone who gains an advantage also gains some new enemies. In the end, only one player will be left standing, and only one commander’s name will be etched into the annals of eternity . . . until the next game begins, of course! Get ready to battle. It’s going to be an historic day.