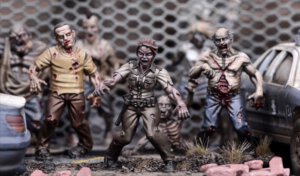 Talk about an exciting development on the miniatures side of things as Mantic Games has revealed plans to produce a game based on The Walking Dead. The working title is The Walking Dead: All Out War and it’s obvious the title will be based on the comic books (All Out War is the title of a twelve issue story arc after all) as the licensing agreement is between Mantic and Robert Kirkman’s Skybound Entertainment.

Sorry to say details are a bit slim but it looks like the base set will retail for $50 and I’d think that’s a nice sweet spot for even non-gamers to get hooked. Unfortunately we’ll have to wait until late 2016 to get our hands on the game. Thankfully, in the meantime, we do have a video with Mantic’s Robbie Renton describing some of what you can expect.

Mantic Games is pleased to announce it has entered into a licensing partnership with Skybound Entertainment for the worldwide rights to produce miniatures games set in The Walking Dead comic book universe.

“The Walking Dead is overflowing with tension, drama and atmosphere,” said Mantic CEO Ronnie Renton. “It provides a deep well of exciting content around which to design immersive, fast-paced games which will let players step into the roles of key characters from their favorite comic book.”

“We’re excited to be partnering with Mantic,” said Robert Kirkman, CEO of Skybound. “This game will introduce our fans to a whole new way of experiencing the world of The Walking Dead.”

Set to release towards the end of 2016, The Walking Dead Miniatures Game will be a tactical, two-player game set in the walker-strewn Atlanta cityscape, with each player controlling a small band of human survivors vying to achieve dominance. It can also be played solo thanks to an AI system developed specifically for this game to ensure walker behaviour is menacingly authentic.

Featuring stunningly detailed plastic miniatures that capture comic accurate likenesses and poses, the gameplay will recreate the desperate struggle for survival that makes the series so popular.

With a target price of £35/$50 the core game will feature Rick, Carl and other heroes and villains ripped straight from the pages of the hit comic book, plus a host of walkers, a selection of scenarios and everything else needed to play. A series of expansions are scheduled for release in the months following the launch, introducing additional fan-favorite characters such as Shane, Michonne and Glenn.

“For us, part of the greatness of The Walking Dead is the tough decisions that must be made to keep your group alive against overwhelming odds,” added Ronnie. “How would you handle the kind of crazy situations Rick and his crew were so often faced with?”