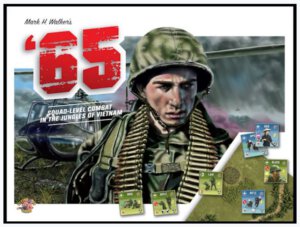 Our friend Mark Walker (of Lock ‘n Load fame) has the first historical wargame release, from his new company Flying Pig Games, up for funding on Kickstarter and it’s currently only a couple hundred dollars away from hitting its goal. 65′: Squad Level Combat in Vietnam brings a card driven element to hex and counter wargaming leading to fast and furious early Vietnam War era battles. You can reserve a copy of the core game and all stretch goals for a $65 pledge.

Fast, furious, and fun! If you are looking for something fresh in board wargaming, ’65 might be the game for you. A squad-level, tactical game, ’65 recounts the early battles of the Vietnam War, from Ia Drang to Operation Starlight, and most everything between. The large and beautiful counters (1″ to 1.375″ square) represent squads, Leaders, Heroes, Snipers, M-48 and Pt-76 tanks, and more.

As these units’ commander you will move and fight over three geomorphic game boards as you try to best your opponent in one of eight, nail-biting historical scenarios. The game is card-driven, using a system similar to Flying Pig’s Night of Man, which adds a sense of delicious uncertainty to the play. “Can I advance my sappers or does the enemy have a fire card he’s just waiting to play?” Furthermore, the cards simplify the game, containing much of the data needed to play. You won’t spend the afternoon with your head in a rule book when you play ’65. This is a game created by gamers for gamers to play.

We believe ’65 is a unique game. The art is immersive. Certainly that isn’t unique today, but we feel ’65 is one heck of a good-looking game. The card mechanic is also unique, adding a subtle layer of strategy to the tactical decisions gamers face in any squad-level game. We love the “Power” system. Action cards that state “Power” can be used to activate special capabilities on many units. We use this to provide smoke-laying, portray a squad with 40mm grenades or the NVA’s ability to ambush their enemy.  Additionally, The simple anti-armor mechanic is different for this type of game. Count the distance in hexes, adjust for the firing weapon’s accuracy modifier, and draw a card. If the To Hit number is greater than the range, you hit. No fuss, little muss, We think these mechanics, coupled with Mark’s empathy for tactical Vietnam games, make ’65 a title that war gamers will want in their collection.