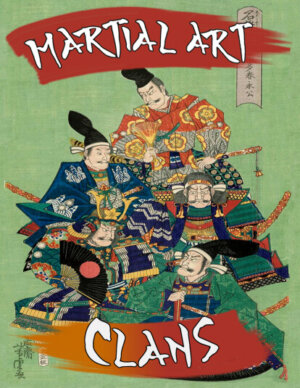 Spider-Goat Games is in the midst of a Kickstarter to bring a second expansion to their Martial Art card game. Martial Art: Clans includes 28 cards which bring factions, leaders, and dojos to the core game. Martial Art is for two to four players, ages 10+, and plays in around 10-30 minutes. The project is fully funded and you can reserve a copy of the Clans expansion for a $9.00 pledge through October 22nd, with an expected delivery date of March next year. You can also add the Martial Art base game for $12.00 and the Battlefields expansion for $9.00.

The critically acclaimed Martial Art returns to Kickstarter with its second expansion, Clans!

Featuring historic Japanese artwork, Martial Art is a card game of factions warring for dominance of feudal Japan. The game takes place over a series of battles in which players must anticipate their opponents’ actions, build their hands, and manage their cards to acquire enough land and power to defeat the other clans.

As clan leader, command your armies and muster forces to conquer places of economic and cultural significance such as the capital Kyoto or the rising city of Edo. But to secure victory will take more than foot soldiers. Provoke a peasant rebellion, influence the emperor to support your claim, or even distract the enemy commanders with lovely Geisha.

Successfully funded on Kickstarter in 2016, the Martial Art base game is available here again, along with the first expansion Battlefields.

The Sengoku period was an age of nearly perpetual war in which the leaders of the great clans vied for dominance. To represent the clan leaders’ effects in war, 8 of the major clans of the Sengoku period have been added to the game each with a unique clan power and leader.

At the start of the game you will choose one of the great clans and take the corresponding card. These cards describe your clan’s special power that you can wield to swing battles in your favor.

Additionally each clan comes with a leader, a powerful card that you may take into your hand when you win a Dojo. Dojos are new lands that come with the Clans expansion.