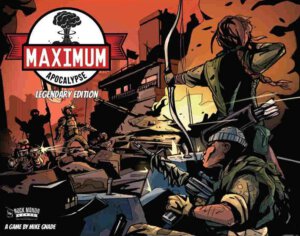 Rock Manor Games has released a special edition of their well received adventure board game Maximium Apocalypse. The Legendary Edition contains the base game, all the available expansions and miniatures, as well as a new Bugpocalypse expansion. Challenge players with a variety of post-apocalyptic settings. The game is for one to six players, ages 13+, plays in around 60-90 minutes, and carries an MSRP of $139.00.

Maximum Apocalypse is a cooperative roguelike adventure game for 1-6 players. In Maximum Apocalypse, civilization has already fallen.  The players are survivors of the apocalypse whose mission is to survive the hostile landscape. The game map is randomly generated and different every time that you play. On each turn, a player can use up to four actions to explore the map, play cards, equip weapons, scavenge for resources, draw cards or battle off monsters.

Maximum Apocalypse Legendary Edition is a revamped version of the popular survivor game by Rock Manor Games.  Maximum Apocalypse fans old and new will fall in love with the new survivor miniatures and custom Game Trayz storage trays. The legendary edition collects the original game and all the existing expansions (Gothic Horrors, Kaiju Rising and Jurassic Perils) along with the new Bugpocalypse expansion into one epic box!  Maximum Apocalypse is a cooperative roguelike adventure game set amid the backdrop of 4 apocalyptic scenarios. As you explore the post-apocalyptic world, one to six survivors work together to complete mission objectives.  On each turn, a player can use up to four actions to explore the map, play cards, equip weapons, scavenge for resources, draw cards or battle roaming monsters.   Picking a unique survivor class within the group, players must plan their strategy while leaning on their character’s strengths in order to defeat monsters and avoid starvation. For example, the Fireman is deadly up close with his ax; meanwhile the stealthy Hunter is great at scouting the map and avoiding traps – but roaming monsters are gathering quickly, and time is running out. Can you survive the apocalypse?

The legendary edition contains the core game, the Gothic Horrors expansion, Kaiju Rising and the Jurassic Perils expansion. It also introduces miniatures in an epic box with a custom made dotage solution.