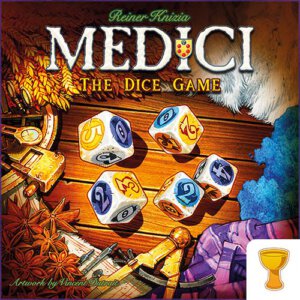 The third game in the Medici series of games, from Grail Games, is nearing the end of its crowdfunding run. Medici: The Dice Game brings the auction and trading action to your table using …you guessed it… dice. The game is for 2-4 players, ages 10+, and plays in around 30 minutes. The project is over 300% funded on Kickstarter and you can reserve a copy of the game for a $20.00 pledge through December 5th. Expected delivery is August 2020.

Medici: The Dice Game is an exciting new design from acclaimed designer Reiner Knizia that dives back into the world of auctions and trade from the Medici board game. Players will have to roll with the whims of fate as they face a never before seen challenge in the Medici line, of games: dice!

Medici: The Dice Game is the third game in the Medici family of games, all designed by the world’s best known tabletop designer, Dr Reiner Knizia, and illustrated by the stunning Vincent Dutrait!
Grail Games has successfully Kickstarted Medici the board game twice as well as Medici: The Card Game. Both titles are well-respected and regarded.

The new Dice Game is a stand-alone sister game to the previous titles. It uses similar ideas, but is powered by dice-rolling and selecting mechanisms.
On a turn, players will select dice that depict various goods of different values to fill their ship, before going to market and scoring for both the value of their ship, and for collecting the different types of goods over three rounds (days).