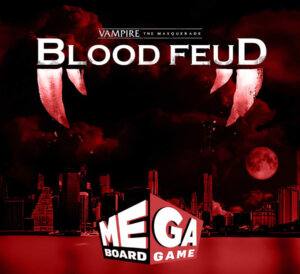 Everything Epic Games is releasing a massive board game based on Vampire: The Masquerade. Blood Feud can field as many as 32 players as gamers take the reins of various factions vying for power. The game is for 4 to 32 players, ages 14+, plays in two to three hours, and will carry an MSRP of $149.99 when it lands in December.

Vampire: The Masquerade – Blood Feud is a highly thematic, team-based, strategic game that plays 4-32 players and is run by 1-2 storytellers who also interact and play. You may play as one of the warring vampire clans such as Ventrue, Tremere, Gangrel, or Toreador, or perhaps you’ll choose to become one of the human factions fighting for their own desires, such as City Hall, the Mafia, or the Arcanum, with many more from which to choose.

Additionally, the game integrates the story world of Vampire: The Masquerade by adding storyteller scenarios that add an optional narrative approach to the game. Players also gain disciplines, which give them powerful supernatural abilities unique to their character. Lastly, teams will choose their ambitions, which allow for multiple paths to victory, such as being bloodthirsty, manipulative, greedy, or somewhere in between.

Blood Feud is dubbed a “Mega Board Game” because unlike a traditional board game, it isn’t played at a single table. Blood Feud requires a large room or two separate rooms with 2-4 tables. One game table features the Cityscape and Orders, the map where players move their forces around the city and order them to fight and take control of important territories.

The other game table features the Council and Market, where players use their best diplomatic and resource management skills to make sly trades, buy upgrades and player level-ups, and make large political decisions that will shape the destinies of teams to determine whether they win or lose! In order to win the game, teams earn victory points through the completion of legacies, which are secret objectives that can consist of all sorts of tasks and achievements earned through gameplay.