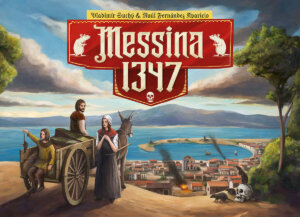 An interesting looking game from Delicious Games is premiering at this year’s Essen Spiele. Messina 1347 presents players with the task of surviving the Great Pestilence while also maintaining their wealth and influence in the Italian city. The game is for one to four players, ages 12+, and plays in around 45 to 120 minutes. I don’t have any MSRP info but you should probably expect the game to be available here in the States later this year.

Messina 1347 takes place during the introduction of the plague epidemic (a.k.a. the “black death”) and the spreading of its infection through town. During this time period, merchant ships delivering luxury goods to Europe brought to these countries an unprecedented epidemic — and one of the first affected cities was Messina, Italy.

In the game, players take the role of important Messina families who are leaving town and moving to the countryside out of fear of being infected by the plague. While doing this, they are focusing on saving other inhabitants and helping to fight the plague infection in town. They must also endeavor to prosper in their countryside residence, where they are temporarily accommodating rescued residents. They are all waiting there for the epidemic to subside, then they return to Messina to take over and dominate particular districts in the town.