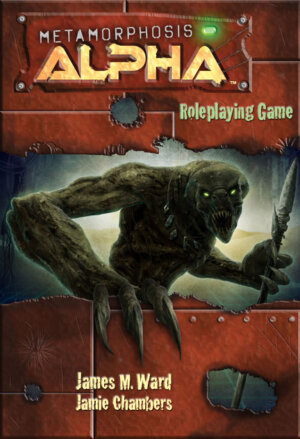 Signal Fire Studios brings the classic RPG Metamorphosis Alpha back to gaming tables this September. Metamorphosis Alpha is an all time classic and was actually the first science fiction RPG ever when it was released by TSR in June of 1976. Originally created by James M. Ward, the game has an emphasis on super science and an element of science fantasy. I have to say I’m really looking forward to seeing this new edition which will be 160 pages in length and retail for $19.99.

Long ago, the generational Starship Warden left Earth to begin a journey to a far-away new home on another planet. The ship was designed to house and nurture its human crew and colonists along with plants and animals of every variety. The ship’s computer, automated systems, and robots cared for its charges well as the Warden silently glided through the blackness of space.

Then something went horribly wrong.

The disaster, cause unknown, flooded the ship with mutagenic energy—leaving almost every man, woman, child, plant, animal, and bug … altered. The mutations range from the benign to deadly, from grotesque to beautiful. All sense of order collapsed as everyone and everything fought desperately to survive. Knowledge was lost as generations of mutants carved out their territory on one of the ships’s many decks, until very few remained who even understood that they lived aboard a ship at all. The technology of the Warden, once mundane and practical, is now puzzled over and used with caution—lest it kill the fool who mishandles it. The automated systems and robots continue to repair and maintain the ship, but they were damaged and have degraded over time. They misinterpret their purpose and cannot identify the strange life that now inhabits the ship.

Metamorphosis Alpha was the very first science-fiction roleplaying game, designed by James M. Ward and published in 1976. After many incarnations, Signal Fire Studios is proud to present a new version of the game for both existing fans and those who’ve never before explored the twisted decks of the Warden. The new product line uses a new set of roleplaying game rules designed by award-winning game designer Jamie Chambers that allows both new and veteran players to quickly jump into the action aboard the Warden!

Play a primitive mutant human, animal, or plan fighting for survival or trying to unlock the many secrets hidden within the starship. Or use the rules for mutant characters to bring them into another world. Alternately, bring characters from another compatible game and pit them against the terrifying denizens of the Warden!