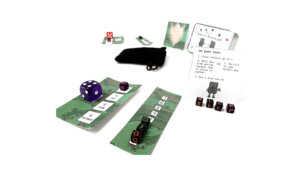 A new highly portable “mint tin” board game is up for crowdfunding from Atikin Games. Mini Memory Mischief is a fast playing game where the players each attempts to string together rows of letters while their opponent tries to cause mischief. The game is for two players, ages 14+, and plays in around 10 to 15 minutes. The project is past the 500% funding level and you can reserve a copy of the game for an $11.00 pledge through October 28th, with an expected delivery this December.

Meet Mikro and Chip. Back in the 80s they were brand new and exciting to their tech nerd fans. Now they find themselves in a dusty old box. No one has use for their archaic technology, but they will also never throw them away.

We can all take a lesson from Mikro and Chip who instead of letting their fate get them down have invented games to play together using their own memory stacks. Rather than worrying about the future they while away their hours playing games and entertaining each other, they’d love to play their favourite game with you – Mini Memory Mischief.

This Kickstarter campaign is to fund “Mini Memory Mischief” the sweet, retro, quite nerdy little mint tin game. It’s 2 player and takes about 10-15 minutes to play. In the game players are trying to get letters in alphabetical order on their memory stack. It’s not as easy as it sounds though! The other player can take their chance causing ‘mischief’ with your stack.

This game is not a ‘memory game’ – memory is the theme of the game as it is played on Mikro and Chip’s internal memory stacks. The game includes dice for luck, player choices using your heart action tokens for strategy, mechanics that test your own memory (not just the digital kind) and cute little components that fit well in their tiny mint tin home. You can take the game with you as it fits nice and neatly in your pocket.