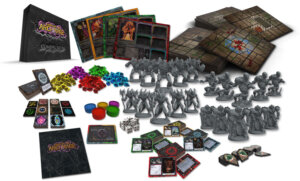 Solarflare Games have revealed their first foray into the world of miniatures gaming with the fantasy title Dawn of the Archmage. The skirmish level action will focus on dueling mages as they unleash wild magics and summoned creatures in a battle for supremacy. The game, for two to four players, is currently up for Kickstarter funding and you can reserve a copy of the base game at the $69.00 pledge level through August 30th.

Dawn of the Archmage is a small unit (miniatures) skirmish game for 2 to 4 players. Each mage will represent a school of magic, summoning powerful monsters to the battlefield. Pitting their fearsome creatures in gladiatorial battle, one mage will reign victorious, ascending to the title of Archmage.

Do you have the strength and strategy to defeat your enemies?  Will you become the Archmage?

Dawn of the Archmage continues the rich fantasy world of Archmage Origins. Once the rulers of Sorcado, mages have fallen from power. Challengers arrive from every corner of the land. Knighted Paladins, land-hungry Lords…​ ​all seek to dethrone the mages. But mages don’t go down easily. It’s time to fight back!

Each mage uses summoning powers to bring new and dangerous creatures to the battlefield. Expending massive mystical energy, their battle grows in frenetic power as monstrous beasts fight for the mages who control them, seeking to destroy all challengers in a magic-fueled frenzy.

Ultimate power hangs in the balance as ferocious monsters shake the earth with battle-lust.

In addition to summoning fearsome creatures to fight, mages pos​s​ess a selection of powerful spells. With a single word, the battle can shift. Manipulating odds, controlling movement, and countering rival’s spells, the mage’s strategy will determine the supreme ruler of Sorcado.