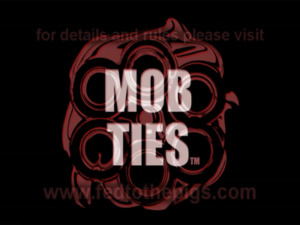 Time is running out to guarantee the production of another Kickstarter project. This time it’s Mob Ties, coming from fledgling game company Hostage Entertainment, and pledges can only be made for the next five days. The title looks promising so here’s more info direct from the designers:

Mob Ties is a board game of negotiation, intrigue and revenge for three to six players. During the course of the game, players assume the roles of mob bosses vying for control of a small city. Moving the members of their families between various locations on the game board, players attempt to collect cash and intimidate or work with other players’ family members to gain respect and protect their assets.

Players are dealt favor cards at the beginning of the game that include attack cards, defense cards, weapon cards and specialty cards. Each turn during the action round, players may play any or all of the cards in their hand, attacking other players’ family members in locations where they also have family members, or defending their own game pieces from attacks.

Each round, cards are drawn from the Fed Deck which determine how many and on what location Feds will be placed. If a location is surrounded by four or more Feds, the players must either defend themselves using weapons to remove one or more Feds, or vote for one among them to be pinched. If a player’s game piece is pinched by the Feds, the game piece is placed in the Prison location on the game board.

To win the game, players must successfully avoid the growing threat of the Feds and defend themselves from the encroachments of other mob families on their territories. As more family members are killed or pinched, the Heat Meter rises, eventually reaching its highest level and signaling the end of the game. Players then count their remaining game pieces and the cash they have accumulated during the course of the game and the player with the most wins.

You can pledge your support to get Mob Ties to the printer (and score a copy of the game of course!) by going to the Mob Ties Kickstarter page.