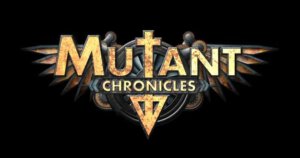 Modiphius Entertainment has a new Kickstarter project to fund a 3rd edition of the Mutant Chronicles roleplaying game and, just days into the run, funding has rocketed past 300% of a £11,000 goal. The original Swedish based Target Games edition was immensely popular in Europe during the 1990s and spawned a variety of spin off games as well as a feature length film. Now Modipius is tackling a new edition which will build upon the series past successes while looking to expand the setting for a new generation of gamers.

The game takes place in a distant future where the Earth has long since been depleted of natural resources and abandoned. Humanity has spread to the worlds of Venus, Mars, Mercury, Luna (the first settlement following the exodus from Earth), and the Asteroid Belt.

Since the exodus from Earth the traditional nation-states of the world have merged into five huge megacorporations: Bauhaus, styled after the culture of continental Europe, the American-influenced Capitol, the Japanese-themed Mishima, the British-inspired Imperial, and the ultra-secretive, ambiguous, high-tech wielding Cybertronic, all of whom use private military forces to fight for resources. Luna (the Moon) itself is considered to be neutral ground and is home to the massive city-state known as Luna City.

Modiphius unleashes the Dark Legion in the 3rd edition of the dieselpunk sci-fi RPG with brand new content & cinematic rules!

We’re raising money to pay for stunning full colour, hard cover books for the settings and rule books starting with the rules and core setting book Mutant Chronicles: Dark Symmetry. We plan to deliver the core book PDF in July, and the print version in August. Backers will receive pre-print PDF’s to assist with proof reading in June.

Modiphius plans re-design of the rules and a re-write of the setting guides and supplements to include brand new material alongside the existing storyline. You can expect the usual high quality production values that Modiphius is known for.

Awesome new art will reveal never before seen parts of the Mutant Chronicles universe alongside the existing fantastic images by Paul Bonner, Peter Bergting and Paolo Parente. You can expect massive campaigns, fantastic accessories and miniatures produced in conjunction with Prodos Games specifically for the roleplaying game.

Mutant Chronicles: Dark Symmetry – The core rules plus everything you need to know about the Dark Legion, their heretics and Apostles, how they operate, their different tactics and creatures, the four big Corporations (Imperial, Capitol, Bauhaus, Mishima), the Brotherhood and Whitestar. The future history that led to the exodus from Earth, a timeline leading up to the first outbreak of the Dark Symmetry, the first Corporate War, the rise of the Brotherhood and the Dark Legion invasion. Full details and rules for life in the 25th century, the colonies and space travel. Plots, adventure seeds, GM advice and plot secrets, lifepath & point buy character generation and a d20 based cinematic system with 8 attributes that is fast and furious.

Mutant Chronicles: Dark Legion – The second core setting book fills in the timeline through 700 years of history to the epic events of the Second Corporate War and Second Dark Legion invasion, the rise of Cybertronic and plenty of other cataclysmic stories. Updated maps of the colonies, and details on the corporations. Plot seeds, the fateful mission to Nero and much much more.

Mutant Chronicles: Dark Soul – This book replaces the Algeroth and Ilian Guide books – however all the Apostles will be heavily represented in the core Dark Symmetry book. The Dark Soul book will detail Pluto, Nero, more details on the citadels, the Dark Legion universe, the true ancient history, their ‘last war’, the in-fighting and politics, more tactics, creatures, and plot seeds.

The Guides – Each corporate Guide book will present more detailed lifepath generation based on each Corporation or Faction, specific equipment, their colonies and resources. Plots and storylines and how the faction differs between the Dark Symmetry and Dark Legion era’s. Additionally each Guide will also double as a guide to one of the worlds or regions of the Solar System with planetary maps and local information on Dark Legion activity. There will also be other guides on Luna, Freelancers, Mutants and more.