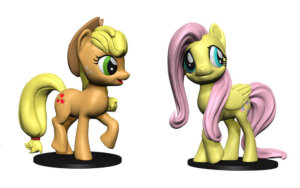 WizKids will be releasing a series of unpainted My Little Pony Friendship is Magic miniatures this Fall as part of the Deep Cuts line. Six ponies are set for the first wave: Twilight Sparkle, Pinkie Pie, Rainbow Dash, Applejack, Fluttershy, and Rarity. Each miniature will carry an MSRP of $4.99 when they arrive this October.

Since its launch in 2010, My Little Pony: Friendship Is Magic has been teaching the world about the power of friendship. WizKids has teamed up with Hasbro to release a line of My Little Pony unpainted miniatures that you can paint at home.

My Little Pony Themed Deep Cuts Unpainted Miniatures lets fans get creative with their favorite ponies and decorate them any way they want. Each miniature comes pre-primed and ready to paint right out of the box. The included decals and stickers of Cutie Marks help to complete each pony’s signature look. Now fans can come up with a look for their favorite pony that’s at least 20% cooler.

Good news! WizKids will be providing support for in-store painting experiences appropriate for long-time fans or parents looking for a great My Little Pony experience to share with their child, in which case the fun has been doubled. Details are still to be determined. So, stay tuned for more information.