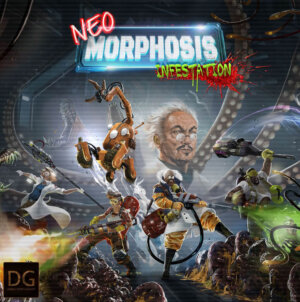 The latest miniatures driven co-operative board game is up for crowdfunding for Dark Gate Games. In Neo-Morphosis: Infestation, players will try to defend their research station from an alien onslaught. The project is over 350% funded and you can reserve a copy of the base game and all unlocked stretch goals for a $140.00 pledge. Right now there’s an early bird $100.00 special running for a few more hours and expected delivery is April 2021.

It is 2159 and the world is very different. New technology abounds, created during the rush to fight the Hot Earth Crisis of 2039. But the NanoMirror Project, finally launched in 2077, either failed or succeeded too well, depending on your outlook. It steadily cooled the Earth, first to comfortable pre-1980 temperatures, through uncomfortably chilly weather, to the current Cold Earth Crisis, first named in 2121. We are in the second Technological Gold Rush, looking for a way to warm the planet, or leave it behind entirely.

You are a member of the 4 man replacement Crew for the World Exit Research Station, where you’ll be working on one of the many research projects taking humanity to the stars. Little do you know what’s in store for you.

Upon arrival, you immediately find yourself fighting for your life against a terrifying insectile alien horde. The crazed and aggressive creatures fight you but they are just as happy to destroy the station itself, while they rapidly metamorphosize 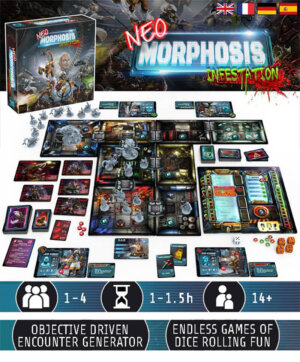 to bigger and angrier forms. Can you hold the station together before you are exposed to the deadly sub-zero exterior temperatures? Work as a team to initiate repairs, seal off sectors against the alien menace and rig the fire suppression system to suffocate the aliens. Bring all your technical skills to bear to program the station computer to avoid systems failures. Recruit the station drone to help repair the mess left behind.

Or maybe you are more suited to a head-on approach. If you can craft makeshift weapons from tools found in the workshops and labs you might stand more chance than swinging a wrench. Raiding the med-bay will help you stem the bleeding, so you can fight another battle.

Will you eradicate the infestation in time or will the station be overrun by the alien menace?

Neo-Morphosis: Infestation is a co-operative game for one to four players. Use the objective driven encounter generator to create endless games of stand-alone dice rolling fun, or string 3 games together for short story-driven campaigns.

Just make sure you squish the bugs before they squish you!