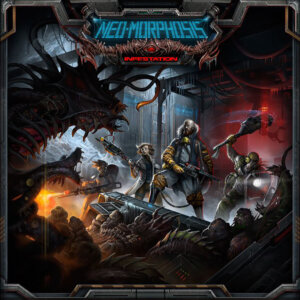 Dark Gate Games has relaunched a Kickstarter to bring the science fiction action game Neo-Morphosis: Infestation. In the game players takes the role of a resupply crew who finds their research station overwhelmed by an alien invasion. Neo-Morphosis: Infestation is for one to four players, ages 14+, and plays in one to two hours. The project is over 400% funded and you can reserve a copy of the game, and unlocked stretch goals, for a $90.00 pledge through November 19th. Expected delivery is December of next year.

It is 2159 and you are living on an Earth frozen by a man-made Ice Age. You are a member of the 4 man resupply crew arriving for your first day on the job at the World Exit Research Station. You’ll be joining one of the many research projects taking humanity to the stars.

You are going to save the world, but not the way you expected to!

Neo-Morphosis: Infestation is a Sci-Fi fast-paced fully co-operative survival game for 1-4 players. In this game, you and your colleagues must preserve the integrity of the research station from the alien creatures that overrun it while completing scenario objectives.  In campaign mode, you play through several connected scenarios while attempting to reach the truck located at the other side of the research station and escape from the creatures that infested it.