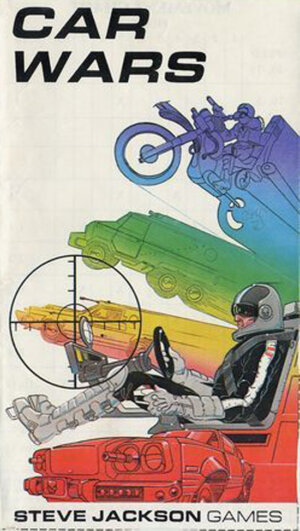 Yes, Elliott and I have talked multiple times on the show how we’d love to see this return, as we played the original microgame release and everything after, and it appears Steve Jackson Games could be on the verge of dusting off Car Wars for a 21st century audience. As a way to blast the Ogre Designer’s Edition across the Kickstarter finish line, with four days to go and over $615k in support, Steve Jackson released this project update late last night:

At the bottom of the main page we have added four new stretch goals, including two which supplement upcoming goals that turned out to be SO noncontroversial that some of you were bored. Okay, we didn’t come here to be boring.

And yes, this is the update that announces the surprise.

Background: Because this project has gotten so much support, we’ve managed to address almost every one of your frequent requests. We ditched the dry-erase sheets in favor of an app; then we worked a flexible erasable sheet back in because some of you really wanted it. We have committed to re-releasing the miniatures and the separate miniatures rules. You asked for a pocket version of the game, and you got it, using the classic counter designs. There will also be a large-sized set of classic counters available as an extra. Even some “flat Ogre” counters will appear, thanks to the generosity of sponsor Michael Johnston. We said “no” to a couple of other requests that might go back on the table anyway now that our print run nears 6,000 (surrrrrvey coming, but later).

But one comment that appears over and over is . . . “Bring Back Car Wars!”

Which is not Ogre! But we’re about to make some of you very happy anyway.

We know that others will be unhappy because, well, it’s not Ogre. True. But we are enlisting help from Car Wars fans to get the word out about Ogre, and Ogre fans will like the new goal PAST the Car Wars goal. I hope you like that, at least!

Others will be unhappy because, once again, we are not following the standard Kickstarter model. We know that! We’re offering a new model, and it works. We are an established company, not a startup, and we are using Kickstarter, plus surveys, to tell us what NEW things the fans want us to do. Otherwise, we’d just keep doing the same things we’ve done for the past several years, and that doesn’t stretch US.

We’re learning a lot, and we’ve used the stretch goals both to make a bigger, better game, and to build up the Ogre community to last long after this project is done. This idea has proven itself by generating over a half-million dollars, a print run twice what we originally planned, and a busy 2013 schedule for a game that was going to be a one-shot. Others will do what we are doing now. It will be good for the game hobby. Enjoy the ride!

So enough beating around the bush. Let’s talk about Car Wars.The $700K goal for this project will be: We will start a survey-driven Kickstarter project for Car Wars. You can read more about it, and the other new goals, in the Stretch Goals section at the bottom of the main page.

What if you are a Car Wars fan who doesn’t want a big Ogre game? Then do not buy the big Ogre game! We built this company by selling you what you DO want. Okay?

(1) We’re going to do a multicolored Car Wars shirt, based on the art from the very first edition of the game. Here’s a nice scan from BGG. Of course, this is a Kickstarter exclusive.

It will say “I Made Steve Jackson Work On Car Wars.” Today, Sunday, you have to see it in your head, because the art isn’t finished. It’s a new $23 support level, or $30 internationally, or you can add it as an extra to another level for $23.

(2) What will help the very most, if you are a Car Wars fan, is to spread the word! We have less than a week to go. Tell your friends about this Ogre project. Work that social media! If you reach fans of Car Wars, they can join in telling us to do that project. If they like Ogre, they can support us and get a good game, and their support will help this project . . . which will also prove to us that we HAVE to do Car Wars. 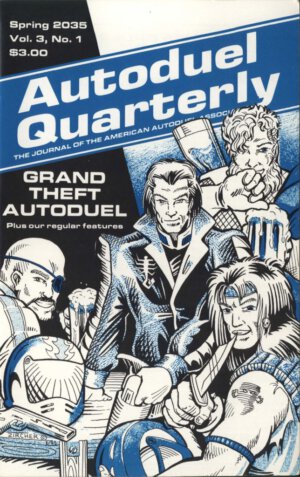 I’m going to take a minute to make mention there are only a handful of classic games Elliott and I played growing up that we would definitely love to see reissued; Car Wars is certainly one of those titles. Yet, as made apparent in the Kickstarter project update, no one who backs the Ogre game is going to get a copy of an all new Car Wars. You won’t even receive the T-Shirt unless you pledge $23 dollars in support or make an additional pledge for that amount. I do understand that SJG is looking to gauge interest in releases and that was the main reason the Ogre project was launched. We already knew Ogre was coming but the folks at SJG wanted to hedge their bets – I get that. What I don’t get is piggy backing a hope of a new Car Wars on top of the current project. To me that’s a bit of a cheat because A) It smacks of just trying to squeeze every dollar out of potential backers even if they have no interest in Ogre but would love to see Car Wars return and, B) It provides no guarantee that we’ll ever see Car Wars again as all you’re doing is making “Steve Jackson work on Car Wars.” That could mean anything folks and you could be out your $23 bucks and hear sometime down the line that the gang at SJG just couldn’t put together a viable product to please fans. Enjoy your T-Shirt though.

I’m not ripping Steve Jackson Games by saying this either. This is a company that I have many fond memories of playing classics like Car Wars, Undead, GURPS, Illuminati and the list goes on. The fact I’m not much of a fan of a lot of their recent or current crop of products doesn’t diminish the love I have for those games. I just think this new update to drive people to pledge more money for the possibility of seeing a new Car Wars isn’t a good move and could conceivably backfire. If SJG really wants to gauge interest – which they don’t because I can guarantee Car Wars is the number one game fans have been crying out for over the last five years – then a separate project should be launched on Kickstarter. This way you can still get a T-Shirt, SJG can see how much demand there is for the game, they can take some of the profits they make from the T-Shirt project and use that to begin pre-production, and finally launch a Car Wars project on KS if they’d like.

All in all, no matter how you feel about how this is being presented on top of the Ogre project, you still have to like the fact that WE ARE going to see Car Wars folks! The interest in Ogre alone have proven to SJG that people will buy.

Just my thoughts folks and we all know what they say about opinions and a certain part of the anatomy. So let the excitement – and no doubt howling from some – begin!