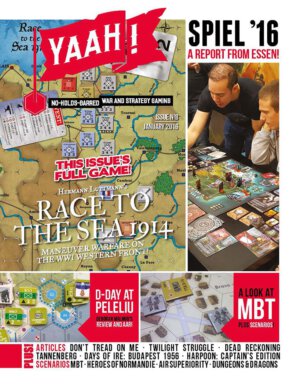 The latest issue of the Yaah! magazine is now available for pre-order and just also happens to include the latest game design, Race to the Sea 1914, from my pal Hermann Luttmann. The eighth issue of the magazine features the usual wargame goodness you’ve come to expect from Flying Pig Games. Plus… Did I mention, Hermann Luttmann has a game in it?!?!? The mag might be titled Yaah! but it has me saying, “Hell, yeah!!!”

Yaah! 8 the magazine of no holds barred strategy and wargaming is available for pre-order. The beautiful, perfect bound, full-color magazine and Race to the Sea game, which includes 36 playing cards, 88 professional-grade die cut counters, and a 12″ x 18″ map. The magazine and game are at the printers and we will be shipping by early January.
It’s our eighth issue and Brad Smith is at the helm of the magazine as a guest-editor. We’ve got 88 pages crammed full of gaming goodness from a diverse group of talented writers. You’ll find news on the latest wargaming releases, a look back at some classic wargames, scenarios, expansions, and of course, our featured game. 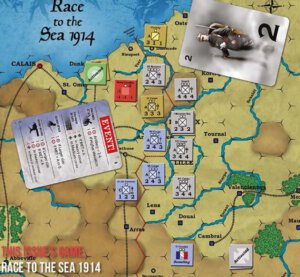 To start off, our feature story is an exclusive tour of Essen by the one and only Ania B. Ziolkowska. Take a tour of Spiel ’16 boardgaming convention to discover not only the up and coming hits but also the hidden gems of the boardgaming world. We’ve dedicated 13 pages to coverage of Essen in this issue. Ania takes you through a guided journey through the halls of Messe Essen, where the world comes to show off and play boardgames. She offers her impressions of various new and interesting games after giving them a test run. She also lends a unique wargamer’s perspective on the experience and value of attending the Spiel convention. This article alone makes this issue worth the price of admission.
We also have a fantastic new featured game by Hermann Luttman, Race to the Sea 1914. As you probably guessed from the title, the game takes place in the early days of World War I. The Allied and German armies in Western Europe attempt to out-maneuver their forces in a last-ditch effort to win the war and be home by Christmas. Hermann’s dynamic and unique rules set features a diceless, card-based combat system that oozes narrative and tension with quick resolution and gameplay. The result is an exciting simulation of the last mobile campaign on the western front fought in World War I.
And that’s just the whipped cream on top of the literary frappe that is Yaah! 8. The magazine includes a Mark Walker-designed Heroes of Normandie scenario set in the Night of Man universe, articles on MBT, Twilight Struggle, and much more.
Tags
Flying Pig Games Hermann Luttmann Race to the Sea 1914 Yaah Magazine