Next Month King of Monster Island Roars Into Stores

November will see Iello unleash a new entry into the King of… series of board games. King of Monster Island will be a cooperative effort as players will each lead their monsters in a team up to bring down a big bad. The game is for one to five players, ages 10+, plays in around 50 minutes, and will carry an MSRP of $69.99.

A new King of Game rises: King of Monster Island.

We have detected irregular movement on the Monster Island. The volcano is erupting like never before. Monsters from all around the world are gathering on the Island, what is happening? They don’t even fight each other anymore!

Because is a greater menace is lurking. Something big enough to threaten every monster and make them fight together against the same enemy…

Was this in the script? Wait… Is this a cooperative King of game?

In King of Monster Island , players take on the role of giant Monsters who must fight together to take down a titanic Boss before the latter can complete the construction of an interdimensional portal.

On each turn, players roll dice to slap, heal, gain energy to buy cards, move around the island, find support or grab some glory. For its part, the Boss is managed by the game. Depending on the result of the dice thrown in the volcano, it moves, activates its Minions and attacks nearby Monsters. Its goal ? Allow his Minions to set up the Pylons needed to build the portal.

To win, players must defeat the Boss. If the latter manages to activate his portal, or to get rid of the Monster of one of the players, the Earth will be definitively lost!

Jeff McAleer
Founder/Editor-in-chief of The Gaming Gang website and host of The Gaming Gang Dispatch and other TGG media, Jeff tackles any and all sorts of games but has a special fondness for strategy, conflict sims, and roleplaying games. Plus, he's certainly never at a loss for an opinion...
Latest posts by Jeff McAleer (see all)
Tags: Iello, King of Monsters, Richard Garfield 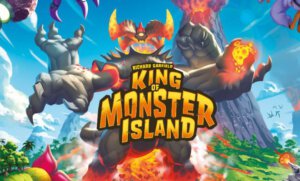 Next Month King of Monster Island Roars Into Stores

November will see Iello unleash a new entry into the King of... series of board games, the cooperative King of Monster Island.
0
Awful