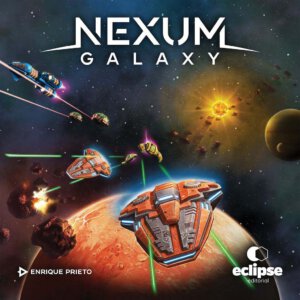 Science fiction game NEXUS Galaxy is entering its final week on Kickstarter for Eclipse Editorial. The game is a scalable 4X system where players can adapt the complexity to suit their playstyle. NEXUM Galaxy is for one to four players, ages 12+, and plays in around 15 to 30 minutes per player. The project is nearing 300% funding and you can reserve a copy of the game for a $35.00 pledge though July 8th.

THE FUTURE OF HUMANITY

Millions of years have passed since the ancient Humans, who arose on the mythical Earth, discovered the technology of stellar travel.

Their descendants, Settlers of Planetary Systems, have traveled the galaxies fighting countless alien species to expand their influence and ensure their survival.

Now they have almost nothing to do with what it was before, and each group of civilizations that has survived has been thanks to its split, evolution, and specialization in the domain of one of the foundations of nature (matter, energy, data, and space-time). Everyone is aware that they lack the knowledge that will allow them to absorb others to gain absolute control. What they call NEXUM…

THE “NEXUM”, DISCOVERED IN “GALAXY”

As a result of the merger of a black hole and a neutron star, one kilonova has exploited alongside the forgotten and remote GALAXY. This has put the focus on from all corners of the Universe in the remains of the Athavian civilization, which before its destruction had secretly reached the maximum knowledge that the ancient codices call NEXUM and the absolute power that it carries. Until that unexpected annihilation, the Atavians had succeeded in dodging attention to GALAXY, progressing silently for the last five hundred million years of the second eon after the Big Bang.

Now the most powerful Groups of Civilizations are arriving from the most remote parts of the Universe through the limited TANNHÄUSER’ GATES. They will fight for the domain of GALAXY and the secrets that the scattered TECHNOLOGICAL RELICS, which they contain the scattered NEXUM knowledge. You will be in command of one of the four armies to control the galaxy and its secrets:

Against: Bad to win and worse to lose. Element: Energy, control of communication.

Each Group of civilizations has managed to use a Tannhäuser Gate to deliver a few spaceships to a Tann (Initial Planet), with very limited energy resources.

From that point of arrival, conquer planets, requisition loot, extract energy, capture Relics, craft, and mobilize new ships to achieve absolute control of the NEXUM that is scattered throughout GALAXY!