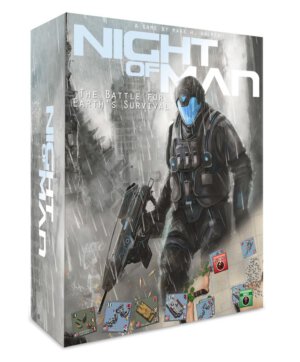 With eleven days left to pledge your support, Mark H. Walker’s Night of Man is closing in on its $11k Kickstarter goal. As what looks to be the first title from the new imprint Flying Pig Games – Walker is best known for plenty of games through Lock n’ Load Publishing – Night of Man is a card driven game of SF tactical combat set in a near Earth future where our planet is under alien attack. Currently you can get on board for the boxed edition of the game at a $50 pledge level.

Why Can’t We All Just Get Along?

It is the year 2037. The home of humanity lies in ruins. Earth’s cities are devastated and a mysterious alien invader known only as “Killers” hunts the last remnants of humanity. Using a mixture of old weaponry and new technology, the survivors wage a guerrilla war against the occupiers. Who will decide the fate of the planet? As the night of man begins, humanity’s spirit to resist reawakens.

They appeared in our solar system without warning in 2034. Humanity’s attempts to communicate with the strange alien race and its massive fleet were completely ignored. The alien fleet drew ever closer to Earth. Humanity’s exhilaration at first contact quickly turned to fear and panic. They attacked.

Earth’s military and population centers were quickly overwhelmed by kinetic strikes that wiped out billions in a matter of days. Men. Women. Children. Their ruthless tactics and unrelenting use of force earned the aliens the only name that could have been given them – Killers.

Three years after the initial invasion, humanity’s darkest hours had come but the human spirit still endured. Slowly but surely, we learned to resist the Killers. This was our home after all. Small groups of militias harnessed every weapon at their disposal to make the Killers pay. The human resistance dusted off Aging tanks and adapted new technology for their purposes.

As time wore on, some humans began to change. Those who could harness the power of their minds in strange new ways were dubbed “Mentals”. They could use their powers to control minds, move metal, and “fling” energy as a weapon. The Mentals allied with humanity’s resistance and amidst the cities of rubble and the oceans of blood, they made the only stand they could – their last stand.

Together, the militias, their weapons, and the powerful Mentals, strive to pull humanity from its darkness. Night of Man is a tactical, game board and counter, card-driven game that recounts Earth’s struggle against the invading Killers, our struggle to emerge from the Night of Man.