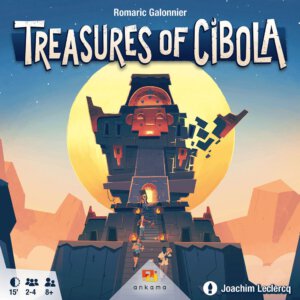 Luma Imports have been busy and another Ankama Studio game arrival is slated for this Fall. In Treasures of Cibola, players will bid explorers as they attempt to secure as many treasures as they can from a gradually collapsing Mayan temple. The game is for two to four players, ages 8+, plays in around 15 minutes, and will carry an MSRP of $19.99 when it arrives November 14th.

Rescuing Mayan treasure is no easy task, especially when the competition is fierce. You’ll have to send your explorers in a nearby undiscovered temple to get the treasures stored inside. But watch out! The ancient temple is unstable and its imminent collapse might just ruin your plans… and some treasures might not be worth what you think!

Treasures of Cibola is a 2 to 4 players family game in which each player controls a team of explorers looking for treasures in the legendary City of Gold. Each turn, the players bet a certain number of explorers; the one who bets the most will have first pick on the treasure cards available. But selecting some cards can cause the temple to degrade further, reducing the value of certain types of treasures and forcing players to adapt their strategies on the go. After eight turns, the player who has the most points wins the game.