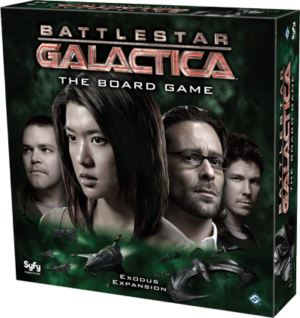 Fantasy Flight has just announced the Exodus Expansion to the popular Battlestar Galactica series. It looks like the game company is following the storyline of the remade series (can we look for a Big Box Collectors Edition at the end of this process?).

The Cylon Fleet (with a new board!): More Cylon development options and human control options. Plus, more crises!

The Ionian Nebula: The more influential minor characters come to life if you play with this option. And directing the human survival becomes even more political.

If you’re a fan of the base game and Pegasus Expansion, this newly announced expansion will be one to keep a close watch on.