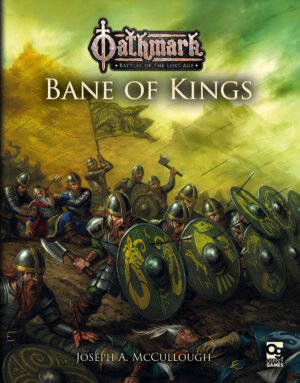 The newest sourcebook for the Oathmark mass fantasy battles miniatures system, from Joseph A. McCollough and Osprey Games, is now available. Bane of Kings tackles the passage of time in regards to your campaign kingdoms as well as new battle options for your armies. The 80 page book is available in softcover for $25.00 or in PDF for $20.00.

Time is the bane of all kings. Always does it march forward, bringing change and challenges, wars and disasters, invaders and internal rebellion. This supplement for Oathmark: Battles of the Lost Age, focuses on the passage of time and its effect on a players kingdom. While wars and battle still determine their ultimate fate, many other events can affect the armies of a kingdom. Plagues and blights can reduce access to soldiers from specific territories. Attempted coups can cost a king some of his best generals. On the other hand, unexpected alliances might give a kingdom access to unusual troops, or the birth of a new heir might bring wondrous presents.

Along with the rules for the passing of years, this book also presents the option to train your units to fight in special formations, such as phalanxes, shield walls, and skirmish lines. These will allow players to use their existing armies to try out new strategies and tactics to swing their battle in their favour. This book also includes several new military expeditions, including numerous scenarios, to once again challenge a player’s generalship.