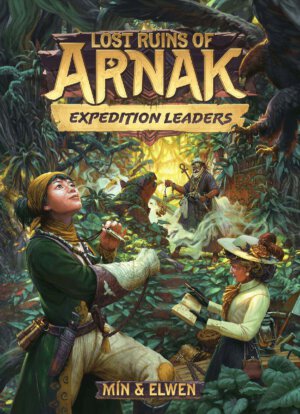 This fall will see the first expansion for the hit Lost Ruins of Arnak arrive from Czech Games Edition. The expansion, Lost Ruins of Arnak: Expedition Leaders, will include new asymmetrical leader decks and alternate research tracks to allow for new strategies and gameplay options. The expansion is for one to four players, ages 12+, plays in around 30 minutes per player, and will carry an MSRP of $29.99 when it arrives in October. Lost Ruins of Arnak was one of my absolute favorite games of 2020 and you can check out my review right here!

Return to the mysterious island of Arnak in this new expansion – Expedition Leaders!

Give your expedition an edge by choosing one of six unique leaders, each equipped with different abilities, skills, and starting decks that offer different strategies and styles of play for you to explore.

In addition to the leader abilities, which bring a new element of asymmetry to the game, this expansion also contains alternative research tracks that offer even more variety and a bigger challenge, along with new item and artifact cards to create new combos and synergies.

Lost Ruins of Arnak is an award-winning board game that offers a unique combination of worker placement and deckbuilding, while each player attempts to uncover the lost island’s secrets.