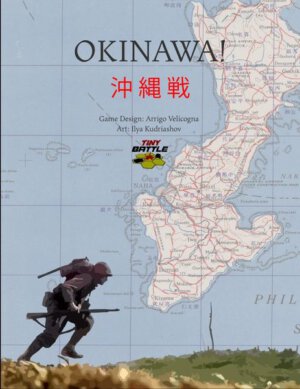 The latest Tiny Battle Publishing release is on the horizon and available for preorder. In Okinawa!, two players will struggle for control of the island as the Allies attempt to prepare for an invasion of the main islands and the Japanese aim to make the price of such an invasion too high to even attempt. The game will ship this month and is currently available for a preorder price of $24.00.

Okinawa! is a two-player game recreating the land, sea, and air struggle for the possession of the Japanese island of Okinawa, from April to June 1945. Seen as the last steppingstone for the final jump toward Japan, the battle was important for both sides. The US had to prove it could overcome enemy resistance, securing airfields, and, after the bloodbath on Iwo Jima, keeping their casualties low. The Japanese had the chance to test their new air tactics relying on simultaneous strikes from multiple groups of Kamikaze and conventional strike aircraft escorted by fighters. They also had a full Army on the island backed, with one of the highest concentrations of Japanese artillery ever seen during the Pacific War. They had to hold part of the island or inflict a level of casualties on US forces to cast enough doubts on their ability to later sustain a larger operation on Kyushu and then Honshu. Stakes were high on both sides. 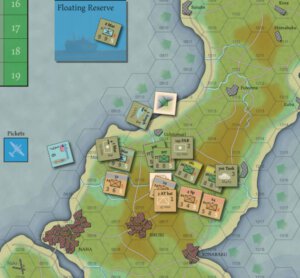 relevant southern part), and the concomitant air and naval struggle around it. On land you have Marine and Army regiments, tanks and amphibious tanks, Japanese forces that run the gamut between highly experienced machine gun battalions to raw conscripts.  At sea Carriers, battleships, Navy and Marine air groups, Japanese Kamikazes, and even Yamato’s last sorties. Even the Commonwealth makes an appearance with Task Force 57, the British Pacific Fleet.

In addition to the campaign, shorter scenarios are included as introductions to the game system, as well as highlighting critical moments of the epic struggle. We’ve also included designer’s notes an a nice example of play.