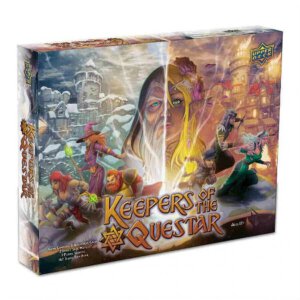 Coming from Upper Deck Entertainment later this year is a one on one fantasy dungeon crawling game. Keepers of the Questar will pit two players against each other as both take on the roles of adventurer and GM as they delve through a dungeon. The game is for two players, ages 12+, plays in around 45 minutes, and will carry an MSRP of $24.99 when it arrives in Q4.

The enigmatic Quest Masters of Arbandy left many mysterious quests in their wake but the most coveted of all is an unrivaled treasure known as the Questar. Tavern tales and oracles of old have said that mortal artistry pales in comparison to the Questar’s beauty. Now competing parties of adventurers have formed to take on the Quest Masters’ quests and become the Keepers of the Questar…

They are inviting you to embark on this journey and collect the Questar for you very own!

But beware, hidden dangers lurk within dungeons encumbered by traps and monsters; ready to destroy the unwary adventurer!

Traps and monsters can be exposed, but can you avoid them all?

– This is a 1 vs 1 dungeon crawler. You will play as both the Adventurer and Quest Master as you face off against your opponent in a race to be the first to compete your opponent’s designed map.
– Combine different maps, heroes, monsters and more to create a new game every time.
– Based on characters from the popular Dungeon Draft card game.