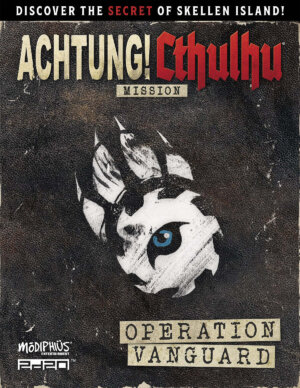 Modiphius Entertainment has revealed the first adventure for Achtung! Cthulhu 2D20. Operation Vanguard takes the player characters into occupied Norway during 1940 to learn what they can about the shadowy Nazi organization, Nachtwölfe. The 29 page adventure is available in PDF at DriveThruRPG for $6.99.

It is August 1940 and the Netherlands is still reeling from the German Invasion just three months earlier. Queen Wilhelmina and her administration have fled into exile and an uneasy peace settles over the country, as the first embers of resistance begin to smoulder.

From the small Dutch fishing town of Nermegen, reports reach Britain’s Section M of a strange installation being constructed on the nearby Skellen Island. They also confirm the presence of Nachtwölfe, the Night Wolves, a Nazi occult organisation devoted to weird science and eldritch technology, who are said to rival Black Sun itself.

Seizing the opportunity, Section M dispatches a covert team by submarine to learn more about Nachtwölfe’s plans. Once in situ, the agents must contact the fledgling local resistance and gather detailed intelligence. Why are Nachtwölfe here? What happened at the forbidden site near the Arn river? What are these Night Wolves doing at St Olaf’s lighthouse?

The agents must piece together several component parts of this mystery, before finding a way to approach the heavily guarded Skellen Island itself. There, they’ll encounter advanced technology, strange, modified creatures, and face a deranged Nachtwölfe commander, intent on completing a bizarre bio-experiment, before confronting the horrifying truth which lies at the heart of Installation 41 itself.

Overshadowing all, is the malice of an ancient undersea race, who, provoked beyond measure by the unwise machinations of man are now ready to strike—a fearsome foe to contend with in Operation Vanguard, a brand new PDF only mission for the Achtung! Cthulhu 2d20 RPG!