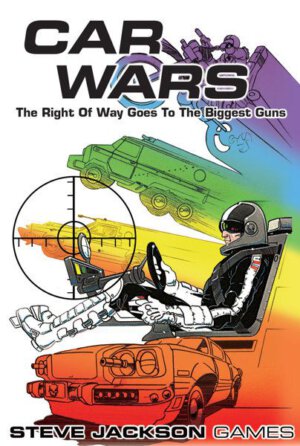 The Origins Game Fair announcements have begun and Steve Jackson Games has revealed the classic edition of Car Wars will be available once again come October. Car Wars is one of our all time favorites (even with all the problems which plague the original system) so it’s nice to see the title make a return. Hopefully this is a sign of an all new Car Wars arriving in the not so distant future.

He triggered the rear guns once more. A direct hit! The blue car skidded as the driver lost control – then flipped and caught fire.
That would teach him not to tailgate . . .

Drive the freeways of the future — where the right of way goes to the biggest guns. Players choose their vehicles — complete with weapons, armor, power plants, suspension, and even body style. Then they take them out on the road . . . to come home as “aces,” or to crash and burn. If a driver survives, his abilities improve, and he can earn money to buy bigger and better cars. Advanced rules let players design their own customized cars, trucks, and cycles.
Playing time 30 minutes and up, for players 10 and older. Any number can play . . . games with 2 to 8 are best.

This is the original version of the game; it’s great as a starter set. Check out Deluxe Car Wars for a fancier presentation of the same game.