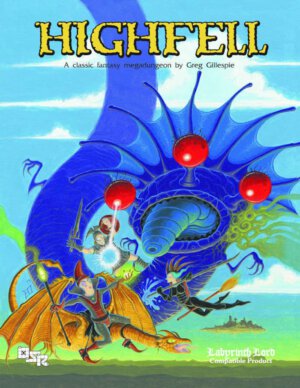 As a big fan of Greg Gillespie’s Barrowmaze, I’m happy to report the creator has unleashed a new megadungeon specifically aimed at OSR roleplayers. HighFell: The Drifting Dungeon is a jam packed hex and dungeon crawl overflowing with hours upon hours of entertainment. Right now you can score the 246 page tome in PDF for $35.00 or as a print on demand hardcover for $65.00 from DriveThruRPG.

Local villagers call for aid! An eerie green light appeared atop the Dwimmerhorn Mountain. The light came from HighFell – the ruins of an ancient wizard school. The infernal blaze grew until a great explosion rocked the mountain. Like a massive floating island, HighFell pulled away from the mountaintop and now slowly drfits across The Great Salt Reach. What happened to HighFell? Why does it float errily across the landscape? Are you brave (or foolish) enough to explore the ruins of HighFell: The drifting Dungeon?

The HighFell: The Drifting Dungeon is a 246-page classic old school megadungeon for use with Labyrinth Lord and other fantasy role-playing games. The pages of HighFell are crammed full with new material, maps, amazing art (including special surprizes by former TSR artists), as well as an amazing colour cover art by Ex-TSR artist Erol Otus that matches Barrowmaze Complete and The Forbidden Caverns of Archaia as a sister-books.

HighFell: The Drifting Dungeon will keep your players on their toes and your campaign going strong for years.

HighFell is brought to you by the Old School Renaissance (so don’t forget your 10’ pole).

This project was created through a group of awesome backers from Kickstarter. Without them, this project wouldn’t have happened. Thank you for your support!