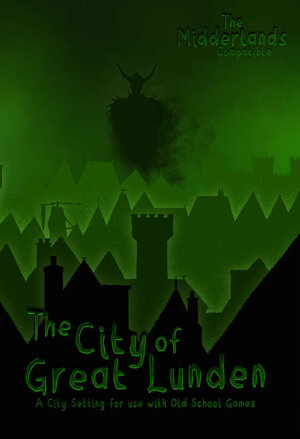 MonkeyBlood Design and Glynn Seal have released the latest supplement for the hit Swords & Wizardry setting The Midderlands. The City of Great Lunden is chock full not only of details for shops and other various locales but also plenty of adventure nuggets for Game Masters to mine. While this is indicated as a S&W product, the supplement can easily be used with nearly any fantasy RPG. The 224 PDF is available for $18.50 from DriveThruRPG.

In the daylight hours, the folk of the City of Great Lunden bustle through the drizzle. Its wards are alive with pickpockets, street brawls, puking drunkards, muggings, and murder. This is the capital city of the Haven Isles and those that come here get streetwise quickly. Then, the night comes.

As the barely-seen sun sets over the myriad of tiled rooftops, Great Lunden is plunged into a green and dangerous gloom.

In the Royal Palace, Queen Elspeth IV’s mood matches the night. The Mad Queen, as she is known, is fickle and paranoid. Her hatred of gossips and spies, as well as her tantrums, spread fear amongst her court. Dukes and duchesses quiver as she glowers at them all through half-closed eyes. One of their deaths is near.

The queen is not the only danger in the cobbled streets of the city. The corrupt city guard, known as the ‘Peekers’ patrol the gloombug lantern-lit city wards looking for cowering souls to intimidate. Unmentionable horrors lurk in the sewers below the narrow alleys and 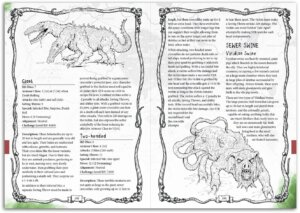 streets. Assassins sneak across the Nightways of the precipitous rooftops above. And in the fields beyond the beryl-bathed outer wards, where shadows fall, lurk things that are hungry.

The City of Great Lunden is a city setting for use with old school roleplaying games. It is designed to be used alongside The Midderlands setting and hence is ‘The Midderlands Compatible’. Game stats are presented for use with Swords & Wizardry Complete, which means they are easily adopted for old school games/retroclones. Much of the content is designed to be as system-neutral as possible, so feel free to use it with any fantasy game system you like.

This book DOES NOT require The Midderlands setting, but it is greatly enhanced with it. There might be references to things found in the other books. 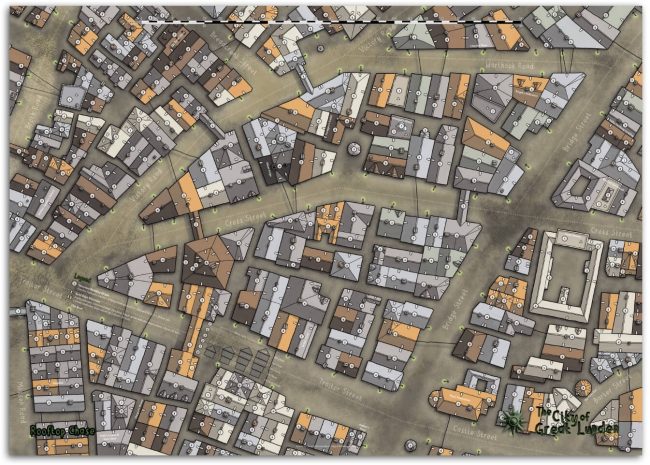