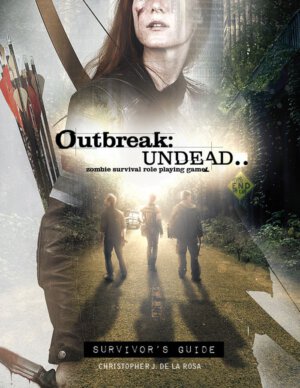 Yesterday marked the crowdfunding launch for a second edition of the Hunters Books roleplaying game Outbreak: Undead. You may recall I reviewed the first edition on our Halloween podcast a few years back and dug the system but felt the presentation just wasn’t my cup of tea. This new edition of the zombie apocalypse RPG promises a much more polished look. The project has already funded and you can reserve a copy of both core books, as well as any stretch goals, in PDF at the $35.00 pledge level or in hardcover at the $100.00 pledge level.

Hunters Books, a book publishing and game design company with multiple successes in the interactive gameplay space have announced they are bringing back their Award Winning title Outbreak: Undead with  a new edition. Fans should expect a more streamlined set of rules, while keeping the survival horror theme that has come to be expected of the title. Players should expect final delivery of products in 2018.

Outbreak: Undead 2nd Edition has been 7+ years in the making, and is now ready to be introduced to the community via Kickstarter. In only 5 hours the campaign funded 100% of its needed goal, and is now targeting hopeful additions such as are acrylic tokens, exclusive survivors binders, a special edition Syrinscape Soundset, and plenty more. “We are ready to take on the next challenge with this new system”, says Ivan Van Norman, co-founder of Hunters Books. “Fans and new players alike will enjoy a game that is both fast, easy-to-play, and tackles all those hard Survival Horror elements”.

Outbreak: Undead will also expand on the SPEW-AI, which was specifically designed to allow players to create themselves as characters in the Zombie Apocalypse.

To launch this endeavor Hunters Books has taken to Kickstarter with following promises:

Expected delivery is expected in 2018, while the time to jump in on the goals will end in 2017.