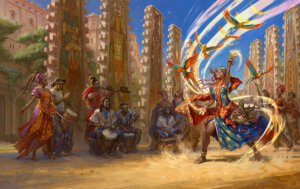 Paizo Inc has unveiled plans for a massive Pathfinder sourcebook slated for a June 2021 release. Pathfinder Lost Omens: Mwangi Expanse will take a deep dive into the region, providing players and game masters all they need to create characters who call the Expanse their home as well as devise plenty of adventuring in the famed land. The sourcebook will clock in at 312 pages.

Lost Omens Mwangi Expanse is coming June 2021! This 312-page book will be our deepest dive in all of Pathfinder’s history into the Mwangi Expanse!

Mwangi Expanse will be exploring various subjects that make the region what it is today. You’ll get to learn about the events that shaped the history of the Expanse, like the rise and fall of the serpentfolk empire and Old-Mage Jatembe’s rediscovery of magic. Learn about the dozens of cultures and people of the Expanse—from Alijae elves to Zenj humans. You’ll also get to understand the role of faith in the Mwangi Expanse and learn about the different gods of the region, which include established deities like Grandmother Spider as well as newer deities like Adanye, the catfolk deity of imagination and protection.

Beyond the peoples and beliefs of the Mwangi Expanse, we’ll get to show you the region itself, traveling along the waterways of the area and trekking into its misty rainforests. 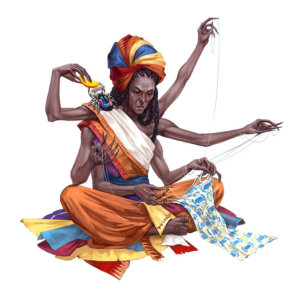 The book will also take you to the various important cities of the region, like Nantambu, home of the fabled Magaambya academy, and Mzali, the temple-city home of the evil god-child, Walkena. Finally, we’ll get to experience the dangers of the Mwangi Expanse by showcasing some of the region’s nastier monsters, including old classics like chaura-kas and new threats like corpse-eating karina.

Of course, the book will also include new rules options to play characters from the Mwangi Expanse. These include cultural items like Song’o fighting sticks or the magic masks that Alijae elves use to chronicle their genealogy. It also includes the player rules for those new deities to worship that I mentioned. Most exciting of all, I feel, are the new ancestries featured in the book. This book features six new ancestries: anadi, conrasu, gnoll, golomas, grippli, and shisks! These six represent a good mix of classic ancestries and new ancestries that we know fans have been wanting to see.

We hope that everyone out there is as excited as we are to check out Lost Omens Mwangi Expanse. Look forward to learning all about it next summer!