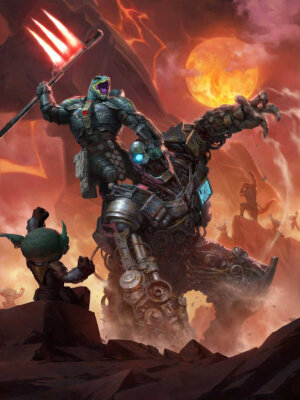 Next summer will see the arrival of the first standalone Starfinder RPG adventure from Paizo Inc. In Junker’s Delight, the player characters will look to salvage invaluable research from a mysterious crashed science ship. The adventure will arrive in July and carry an MSRP of $22.99.

Our first offering, Junker’s Delight, is scheduled for July 2021. Written by Starfinder developer Jason Keeley with Misha Bushyager, this 1st-level adventure puts player characters in the role of “junk tourists” on the red planet Akiton, searching for riches in the graveyard of crashed starships just outside the settlement of Khefak Depot.

Another new adventure follows Junker’s Delight in September 2021, so keep your communication channels open to the Paizo blog for further details on this adventure and more to come in the future!
The first stand-alone adventure for the Starfinder RPG is here! Centuries ago, the Stellar Flare—a science vessel researching the strange dimension known as the Drift—crashed on the surface of Akiton. Now, Vari-13, an android with a claim to the Stellar Flare, wants to find the wreck and rescue its valuable research. But Vari-13 will need help, and that’s where your heroes come in. The Stellar Flare’s remains lie in the middle of an enormous junk field filled with malfunctioning technology, inhabited by predatory creatures, and fought over by territorial space goblins. And there are whispers of an enormous robot made entirely of junk that wanders the scrapyards, immune to magic and eager to destroy everything in its path. Can your heroes broker a peace, reach the wreckage, and defend it against an army of scavengers? Junker’s Delight is a complete Starfinder adventure for 1st-level characters written by Jason Keeley and Misha Bushyager. It features strange new alien creatures, new spells and equipment, and an in-depth look at Khefak Depot, a rough-and-tumble Akitonian settlement home to countless adventures!