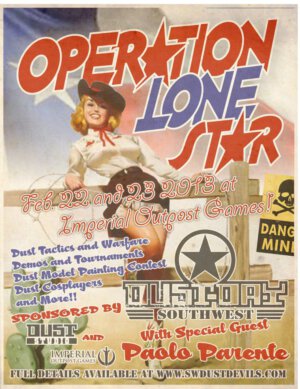 My pals Jay Mann and Rick Ivansek (the duo behind the 2012 Vul-Con show in Arizona) have now turned their attention to the local Dust Tactics and Dust Warfare scene by focusing on The Southwest Dust Devils. The upcoming event taking place at my choice of gaming stores in the area, Imperial Outpost Games, will be drawing Dust players in for lots of miniatures fun as well as a special appearance by Paolo Parente, the famed illustrator and designer for the Dust universe. Stay tuned for more coverage as I’ll be making my way out to talk to Mr. Parente at the event but, in the meantime, here are the particulars of 2013 Southwest Dust Day.

From The Southwest Dust Devils:

Southwest Dust Day will be held in Phoenix, Arizona on February 22nd and 23rd, 2013. The event is sponsored by Dust Games and hosted by the Southwest Dust Devils at one of Arizona’s premiere game shops, Imperial Outpost Games. The scenarios are Texas-sized and set in rural Texas where all the factions are embroiled in a showdown over possession of a large VK mine. Don’t let the setting confuse you, the event’s in Arizona, but the scenarios are a series of shootouts in Texas, culminating in a giant multi-player free-for-all twisting and turning through a maze of tunnels in a multi-level VK mine!! And that’s not the most exciting part, Paolo Parente will be there in person to cheer you on, and he’ll be joined by Rosie, Angela, Red Yana, and Sigrid! All this, plus cool prizes and swag – trust us, this is the one Dust event you don’t want to miss!

The Dust Warfare tournament will be for lists of 300 points.  All Dust Models kits as well as regular Dust units will be legal for this tournament. (i.e. – Recon Mickey, Otto, etc.) Stats for these will be made available by our staff. Please have your army lists made and your armies separated and ready to play as soon as your time slot starts. You will be allowed 2 lists, 1 main list and 1 alternate.

Game tables will be pre set-up and the particular table used will be determined randomly by the game judge. Plan on possibly playing tables composed of swampland, steppe, city, farmland with canal and bridge. The battle builder will be used as normal to determine scenario details.

Games will be timed with chess clocks and time limits imposed to keep the games within the allotted time windows. Game time is 90 minutes and 5 Swiss rounds will be played.

For questions regarding the tournament and/or to reserve a slot email: [email protected].