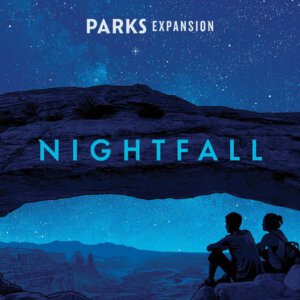 Keymaster Games has a crowdfunding project to bring not only an expansion of the hit game PARKS to the masses, but also to create a new line of PARKS games too. The PARKS: Nightfall expansion adds more national parks to the proceedings as well as new gameplay mechanics such as camping. PARKS: Memories is a (you guessed it) memory game, with light strategy elements, available in three flavors. The Kickstarter has already blazed past the 800% funding level and you can reserve a copy of the expansion and/or any one of the Memories games for a $22.00 pledge through February 25th. Expected delivery on all products in the project is this September.

In 2019, 9,781 backers brought PARKS, a board game that celebrates the US national parks, to life. PARKS is a collaboration with the Fifty-Nine Parks Print series, featuring art from 51 artists, that allows anyone to sit down and explore the wonder of the US National Parks with friend and family. 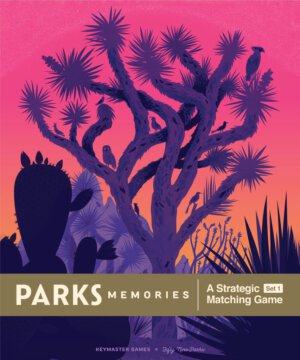 The national parks exist to preserve many wonders of nature, but they also harbor some of the darkest skies and clearest views of the stars. This is the reason you might hear the saying “Half the Park is after Dark.” It is the inspiration for PARKS Expansion: Nightfall.

Nightfall offers a whole new year of hiking for PARKS lovers to explore. It includes 24 new Park cards that reward instant actions when visited, a new Year deck along with ways to obtain new Year Cards while hiking, plus the introduction of Camping, which grants powerful once per season actions to those hikers that do not dally on the trail.

PARKS inspires players to share their stories around the table; the memory of first seeing the Grand Canyon or of standing next to a 35-story Redwood tree. PARKS Memories is a new way to share those experiences featuring approachable, flexible gameplay.

PARKS Memories is a stand alone matching game that should feel instantly familiar while still offering new strategic depth to the genre. Every turn, players reveal two tiles attempting to match park types which grant single use abilities. Then players take one revealed tile into their collection, blocking one other revealed tile with the Hiker. Use your abilities to reveal, reorganize, block, and hide Parks as you seek to collect 3 matching sets before your opponent(s).