Paizo Inc has plenty in store this October for both the Pathfinder and Starfinder roleplaying games. These releases should be available at your FLGS and online early in the month. 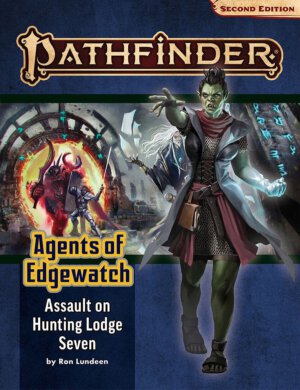 The Agents of Edgewatch Adventure Path continues! Armed with the identity of a powerful Norgorber cultist belonging to the so-called Twilight Four, the agents infiltrate a soiree of alchemists and poisoners in order to apprehend the sinister Infector in his underground hideout. But before they can get their high-ranking criminal back to headquarters, foul weather and bureaucratic obstructions force them to hole up in the abandoned Hunting Lodge Seven, where they must barricade themselves against mysterious assailants and assassins intent on getting at their prisoner. Can the heroes stave off the assault long enough to see the Infector put behind bars? And what occult mysteries will they uncover when they pursue their next lead, a foray into the haunted old amusement park called Harrowland?

“Assault on Hunting Lodge Seven” is a Pathfinder adventure for four 12th-level characters. This adventure continues the Agents of Edgewatch Adventure Path, a six-part monthly campaign in which players take on the role of city watchdogs and dole out justice to Absalom’s most nefarious criminals. This volume also includes new rules and inspiring details about the legends of the mysterious Harrow, tales of some of the countless mortals aspiring to divinity via the Test of the Starstone, and a mob of new monsters and villains for urban fantasy campaigns. 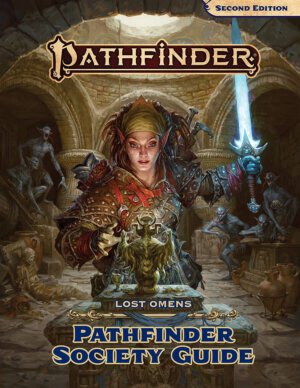 The Pathfinder Society is a globe-trotting organization of adventurers, scholars, and warriors all dedicated to exploration, collecting lost knowledge and treasure, and sharing it with the world. Lost Omens: Pathfinder Society Guide details everything players and GMs need to know about the Pathfinder Society, from the basics of membership, to the Society’s various factions, to the various lodges littered throughout the Inner Sea region. This book is the go-to source for the history and lore of the Pathfinder Society and features new rules content including new equipment, wayfinders, and support for Pathfinder-related archetypes! A useful book in its own right, this helpful volume is a must-have for participants in Paizo’s massive Pathfinder Society worldwide organized play campaign, and a great way to get involved in the international campaign! 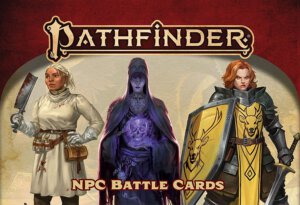 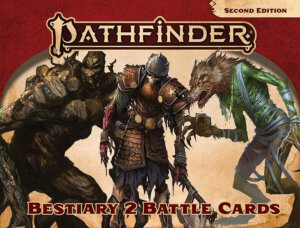 Expand your encounters with this massive collection of 450 reference cards, featuring every monster from Pathfinder Bestiary 2! Each 4 x 6 card is printed on sturdy cardstock and features a beautiful, full‑color image of a Bestiary 2 monster on one side, while the other side provides that monster’s statistics for quick and easy reference. With each encounter, show the players what their characters are facing while keeping the monster’s abilities at the ready, and watch your games come alive! 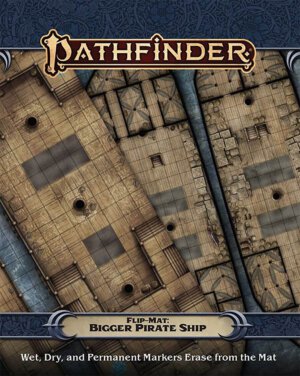 The only thing worse than a pirate ship on your tail on the high seas is an EVEN BIGGER pirate ship! Whether your heroes decide to board the enemy vessel or purchase a sprawling ship of their own, Pathfinder Flip-Mat: Bigger Pirate Ship has you covered. Each side of this Flip-Mat features views of an enormous sailing ship and its decks. Don’t waste your time sketching when you could be playing. With Pathfinder Flip-Mat: Bigger Pirate Ship, you’ll be ready next time your players decide not to turn tail and run and meet those pirates head-on!

Pathfinder Flip-Mat: Bigger Pirate Ship measures 27 by 39 inches, which gives you 45% more gaming space than the standard Pathfinder Flip-Mat. On tabletops across the world, the Flip-Mat Revolution is changing the way players run their fantasy roleplaying games! Why take the time to sketch out ugly scenery on a smudgy plastic mat when dynamic encounters and easy cleanup is just a Flip away? 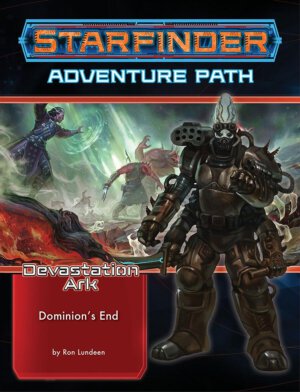 Upon gaining access to the hostile starship known as Ark Prime, the heroes find themselves immersed in propaganda designed to show the might and superiority of the ancient empire that launched the vessel eons ago. Once they break free of the brainwashing, they can fight past robots, holographic constructs, and alien supersoldiers awoken from stasis to confront Ark Prime’s evil AI. In the end, the heroes must decide what to do with hundreds of other sleeping citizens of a formerly dangerous civilization. Their important decision could affect the future of the galaxy!

“Dominion’s End” is a Starfinder Roleplaying Game adventure for four 18th-level characters. This adventure concludes The Devastation Ark Adventure Path, a three-part, monthly campaign in which the players stop the threat of an ancient alien civilization in Starfinder’s first high-level adventures! This volume also includes a catalog of technomagical relics from the ancient Sivv Dominion as well as a selection of ferocious alien threats. 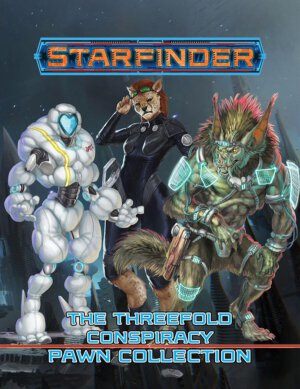 The Threefold Conspiracy Pawn Collection, together with the creatures and characters from the Starfinder Alien Archive Pawn Box and Starfinder Core Rulebook Pawn Collection, provides pawns for nearly every Threefold Conspiracy encounter. Each cardstock pawn slots into a size-appropriate plastic base from the Alien Archive Pawn Box, making the pawns easy to mix with traditional metal or plastic miniatures. 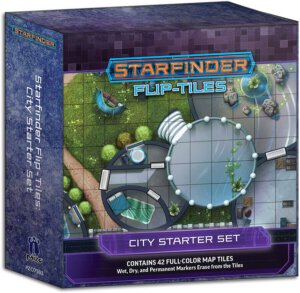 Jeff’s Note: The Pathfinder Second Edition Beginner Box was originally slated for an October release but it has moved to November.