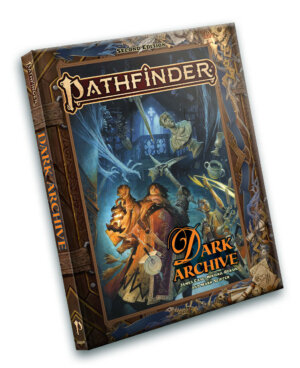 A new paranormal themed sourcebook has been announced for Pathfinder from Paizo Inc. Players and GMs will be able delve into the paranormal of the world of Golarion in Pathfinder Dark Archive. The 224 page hardcover arrives on July 27th carrying an MSRP of $54.99 (or grab a special edition for an MSRP of $74.99) or score the PDF alone for $14.99.

From the fringes, the unknown beckons. Pathfinder Dark Archive contains secrets that any player or GM can use to reveal the paranormal lurking in their Pathfinder games! This spine-tinglingly secretive 224-page hardcover rulebook presents two new character classes perfect for delving into the unexplained: Unleash the untold power of your mind as the psychic or leverage supernatural secrets and mystic implements as the thaumaturge!

Beyond these new classes, eight secret case files each provide player options, GM tools, and lore into a different paranormal topic, including: