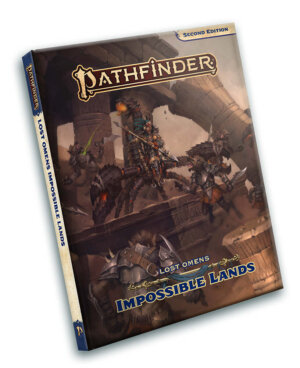 Paizo Inc has revealed a new region sourcebook for Pathfinder. The hardcover Pathfinder Lost Omens: Impossible Lands explores a ravaged landscape in the midst of a never ending war between two archmages and their followers. The book will carry an MSRP of $59.99 when it arrives in October.

In a land still scarred by a war between two undying archmages and their respective nations, reality defies the rules binding the rest of the world. Cities crafted by wishes and fields harvested by the walking dead lay in between lands where magic warps and twists with an undefinable will. Explore the history of immortal wizard kings, wield explosive and unusual technology, and channel awe-inspiring legends in a region where the present is still haunted by the past, and echoes of destruction still shudder across the minds and souls of those who brave the Impossible Lands!