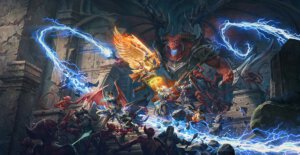 A new entry into the line up of Pathfinder CRPG games has hit Kickstarter for Paizo Inc and Owlcat Games. In Pathfinder: Wrath of the Righteous, gamers can lead a party of heroes (or anti-heroes) in battle against demonic forces as they aim to close a portal to the nether realm. The project has already rocketed past its funding goal and you can reserve a copy of the game, and unlocked stretch goals, for a $28.00 pledge through March 11th. There’s an expected delivery of June 2021.

As you may know, we at Owlcat Games have spent countless hours playing the Pathfinder tabletop RPG. We enjoyed it so much that we decided to bring this experience to the videogame format by creating a classic isometric party-based computer RPG called Pathfinder: Kingmaker. The phenomenal love and support shown for Kingmaker have inspired us to tell another story from the Age of Lost Omens. Today we are thrilled to introduce the adventure we are so passionate and excited about – Wrath of the Righteous!