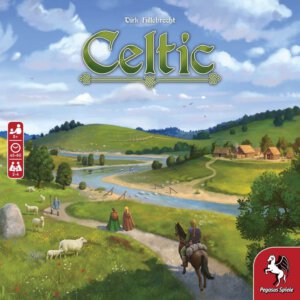 Pegasus Spiele will be releasing an English language edition of the family game Celtic, designed by Dirk Hillebrecht, later this year. In the game, the player compete to be named the new Lord of the Wetterauby collecting goods and completing goals throughout the region. Celtic is for to to four players, ages 8+, plays in around 45-60 minutes, and will carry an MSRP of $39.99 when it arrives in late 2020.

In Celtic, players hope to become the new ruler of the Glauberg, a region of Germany not far from Pegasus Spiele’s headquarters where remarkable Celtic relics have been discovered.

The Celtic Lord of the Wetterau is looking for a successor. To prove themselves worthy, players have to travel the region and trade with neighboring tribes. Each turn they have to perform one movement with their family members; other players at their starting location can decide to join them. While some locations allow players to collect goods, others have to be visited to fulfill goal cards which grant influence (victory points). The game ends immediately once a player has fulfilled five goal cards or chooses to reveal that they’ve collected one good of every kind. Players then tally up their points and the most influential Celt wins.