Phase Shift Games has a Kickstarter running for both an expansion to Dungeon Drop as well as a standalone card game. Dungeon Drop: Dropped Too Deep adds more monsters, treasures, and play options to the core game. Tavern Tales: Legends of Dungeon Drop is a card game of bluffing, boasting, and one-upsmanship. The project is past the 1000% funding level and you can reserve each for a $16.00 pledge through October 29th. Expected delivery is next July. 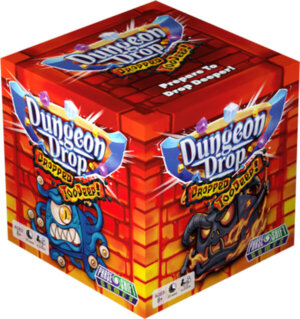 Dungeon Drop: Dropped Too Deep is an epic expansion for the premier “drop-style” tabletop game. Face new challenges as you and your brave companions dive deeper and deeper into the dungeon. Unspeakable (yet remarkably adorable) denizens have emerged from the depths, but it is whispered that fragments of the great relic are among them. Will you take up your sword once again and meet the new horrors that await you?

…it’s time to drop deeper into the dungeon! 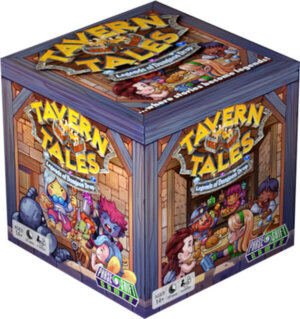 Following your perilous drop into the dungeon, you are called home to the Traveler’s Tavern for some warm Gingerbrew and an evening of heroic tales shared with the local rabble. Complete your Dungeon Drop story with Tavern Tales, as you and your companions compare mighty deeds in a strategic game of boasting and one-upmanship!

In this raucous card game of set collection and subtle bluffing, 3 to 5 heroes scheme their way to becoming the most renowned hero of epic legends!

Tavern Tales plays over a variable number of rounds. In each round, player take turns as follows:

STEP 1: Using your hand of hero cards, stake your claim. Select one of the locations in play and identify which treasures you claim to have found or how many monsters you slayed there.

STEP 2: Dispute your companions. Other players may now use their hand of hero cards to dispute your claim and attempt to take the glory for themselves.

STEP 3: Turn your stories into legends. After a bit of one-upping and strategic bluffing, a final victor for the claim is declared. That player collects the disputed treasure or monster cards and score points based on how many of those identical cards they have previously collected. Through this set collection aspect, players are incentivized to remain in the lead on one or several types of claims in order to prevail.

The game ends when one player has achieved enough fame to become the most renowned hero of epic legends!