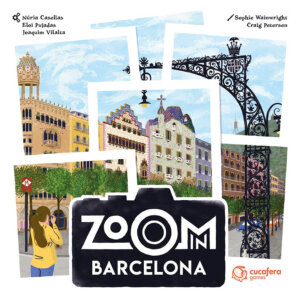 A tourism photography board game arrives from Blue Orange Games this Spring. In Zoom in Barcelona, players will try to take the best photos throughout the famed city in order to win a contest. The game is for two to six players, ages 8+, and plays in 30 to 60 minutes. No MSRP info yet but Zoom in Barcelona arrives in May.

Travel around the city of Barcelona and take the best photos to win the game!

In Zoom in Barcelona, players compete in a photo contest to try to take the best photos of the city. Hop on a bike, catch a taxi or a bus to get to the best spots before the other players. During the game you will take photos of its beautiful locations, the iconic structures that create the skyline of Barcelona, and… dragons!

Find the best views of the city, from its seashore to the mountains of Collserola and Montjuïc. Discover its incredible architecture, and the outstanding Modernist sites including those of visionary architect Gaudí.

Did you know that you can find more than 400 dragons in the city of Barcelona? Many artists and architects have included dragons in their works, and dragons and other fantastic beasts are at the centre of cercaviles and correfocs (traditional fire parades). Barcelona is a city of dragons! 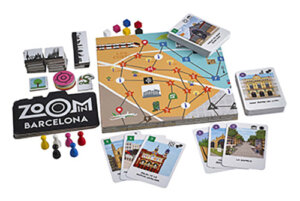 Are you ready? Grab your camera and win the game!

The goal of this board game for 2-6 players is to score the highest number of points to win the photography contest. When a player takes their 8th landmark photo the game will end, and the photographer with the most points will win.

Points can be scored by:

First time players learning the basic mechanics of the game, or those who want a shorter play time can play with the Photography Starter Kit version.