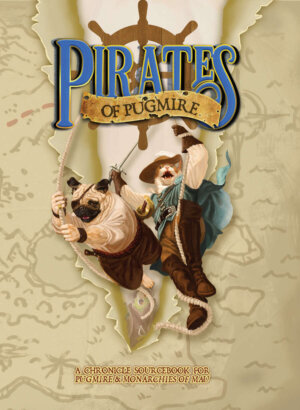 Onyx Path Publishing has released the latest sourcebook for the Pugmire roleplaying game. Pirates of Pugmire includes game info to bring your adventures to the Acid Sea as well as two new races to the system: birds and lizards. The 157 page premium hardcover is available at DriveThruRPG for $44.99, in standard hardcover for $34.99, or in PDF for $14.99.

“Out here on the Acid Sea, it doesn’t matter what your house is or what noble family you’re fidescended from. All you need is a sturdy ship, a plastic hull, and a firm wind behind you. And maybe some guns.”
“Stumpy” Sabu Chromachilde, gecko captain of the Pig’s Tale

With the advent of the plastic hull, people of all species took to the Acid Sea to explore, seeking new shores and facing dangers unknown. Life on the sea is different than life in the relative safety of the kingdoms and monarchies. Sailors must face the dangers of hunger, starvation, or becoming hopelessly lost and adrift while the plastic hulls of their boats slowly melt into uselessness. Large portions of the sea remain unexplored and uncharted, denying pirates the assurance of a safe journey home. If treasure is found, there’s always a hostile crew or two out there on the waves, lying in wait to raid returning ships. And twisted corpses of dead sea life animated by Unseen forces haunt the waves. It takes an extra level of grit to brave the Acid Sea. Do you have what it takes?

Pirates of Pugmire is a chronicle sourcebook for both Pugmire and Monarchies of Mau. It’s usable with either game, or as part of a joint experience.

CAN YOU BRAVE THE ACID SEA?