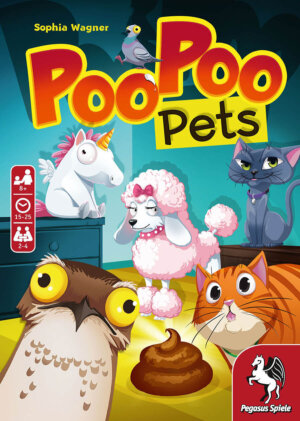 March will see the release of a new game from Pegasus Spiele aimed at families with a sense of humor. Poo Poo Pets, designed by Sophia Wagner, is a dice chuckling, race to eliminate your opponents. The game is for two to four players, ages 8+, plays in 15 to 30 minutes, and will carry an MSRP of $17.99 when it arrives next month.

Poo Poo Pets is all about speed: Each player has a number of tiles showing specific dice results in front of them, and all players play simultaneously while trying to roll the dice combination displayed in front of any of their opponents, using their own six dice. Once they succeed, they quickly press the squeaky-toy poo to pause the game and take the corresponding tile from their opponent. If a player runs out of tiles in front of them, they drop out of the game. The last remaining player wins the game.

In Poo Poo Pets, all players roll their dice at the same time, trying to roll the number combinations shown on the other players’ tiles. As soon as a player does this, they quickly squeeze the squeaky poo pile. All players must pause to see whether the combination is correct, and if it is, the player may take the tile. As soon as a player runs out of tiles, they’re eliminated from the game.

Poo Poo Pets is simple, frantic fun, with all players in action at the same time and an eye-catching toy poo to buzz out one opponent after the other.